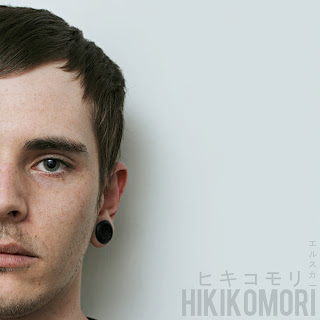 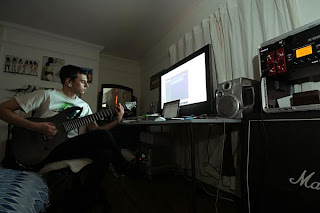 I've been following Marc Le Cras' project El Scar pretty much since its inception a couple years ago. Back when he was doing metalcore and straight-ahead djent sort of releases it really wasn't anything too special, but recently he's been developing a sound that is more and more of his own. This new release is his first full-length since his since 2010 and sees him finally bringing his own sound to the world.
With this new full-length we see an expansion on the ideas that Cras was experimenting with on his last two EPs, 2011's God's In His Heaven, All's Right With The World and Drowning In Information, Starved For Knowledge which was released last month. Though still very much a djent album, the post-rock ideas he began exploring in his more recent material makes more of an appearance on here than ever before, with a much larger impact on the songwriting as well. While a song like II is pretty standard for the genre and really doesn't do anything too original, there aren't many other moments on this album where you get more typical ideas like that. Even if the post-rock ideas are just enough to turn a regular instrumental djent track into something resembling that of ambidjent, the ideas are far more interesting and engaging, to me anyway. Though I will warn you that this is a long album, and it's the type of album that proves to be taxing on the listener. In all honesty, it might even be a bit too long, with some tracks sounding a little too much like filler and not really fitting in with the rest of the album.
I know that the project itself is influenced by the anime series Neon Genesis Evangelion, a show I'm only vaguely familiar with despite being quite the anime fan when I was younger, but having watched a handful of episodes on television recently, I can say that there are several tracks on here where a similar mood is evoked. Honestly, the longer songs tended to have a much wider score of atmospheric qualities, not sticking to being only a djent song, or being a post-rock song, or an ambidjent song, but sounded like a middle ground between all three. It's on songs like IV or VI where I could finally see the project as something unique and original, sounding like something unlike other groups/projects that the genre has produced. The ideas used in those songs manages to convey a sense of coldness, darkness, and, as the title of the album suggests, extreme depression. I won't go so far as to say that every track captures the feelings and atmosphere that I saw when I watched the anime, but those handful of songs on here that do capture it, are songs that stand out as some of the best songs the project has produced. I'm fairly certain that a good majority of people might not view this in the same way that I do, but as someone who has pretty much followed the project since day one, I can tell that this album is considerably more advanced than his previous work and, once again, is much closer to being a completely unique project.
By the end of it, I do feel as though I have been through an awful lot, which may or may not be a good thing depending on how you wind up feeling about the album. It's definitely a mixed bag, and while above I will say that this is the project's most complete sounding vision to date, it's not going to go down as a masterpiece. I definitely look forward to hearing what Cras manages to do in the future with the project as this album does give hope that he is coming into his own.
Overall Score: 7
Highlights: IV, VI, X
Posted by maskofgojira at 1:10 AM