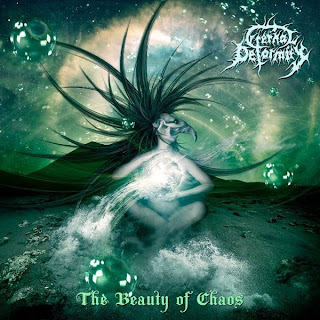 I have to admit that this was yet another band that I thought had actually broken up. I originally found this band around 2008, and I really hadn't heard anything new regarding them in the years after I had found them so I had just assumed that they had broken up. When I was sent this album I was really surprised that they had not only been working on a new album, but that it was coming out pretty soon. Epic fail on my part.
If there's one thing I love about the avant-garde metal scene, it's that there's always variety. No matter the band, on an album you could get various styles interacting or interchanging numerous times, and I find that extreme exciting. Variety is the spice of life, so it only makes sense that it enhances music as well. Eternal Deformity, despite their more doomy past, have developed into a band that is far more interesting and unique. There's always something going on in a song that isn't in another, and though that is a trait that the avant-garde, or even progressive for that matter, genres have going for them, Eternal Deformity demonstrates on here that they are more than capable of crafting songs that do not sound like other bands.
Though it is a bit of a stretch, the only bands I could even begin to compare Eternal Deformity are their Greek and Hungarian brothers in Transcending Bizarre? and Damned Spirits' Dance, respectively, but even those are still pretty fleeting comparisons at that. I'd say that the boys in this band are a bit more diverse in terms of the genres they utilize than either of those bands, but the symphonic, and occasional power metal, influences mixed in with the black metal sound is why I even bring those bands up. I know that the idea of power metal being mixed with black metal isn't a sound that will be all that appealing to a lot of people, and I'll even admit that I'm not huge on the power metal genre, but when it's used sparingly and when it's used in a way that compliments the rest of the music, of course it's going to appeal to people with weird tastes. In a sense, the clean vocals are a bit reminiscent of the power metal genre, at least to me, though they're not nearly as high or annoying as the sound many are probably imagining, the tone of the voice and the melodies used do bring a hint of that to the choruses of songs like Lifeless and The Sun. Sure, I'll admit that I'm not one for synthesized horn sections, The Beauty of The Ultimate End, and that I find a whole lot of bands that work within the "symphonic" realm of things rather pretentious, but as long as the orchestration fits with the music and doesn't change the band into a backing band (I wish I could've found a more elegant way to phrase that).
But like I've said in numerous other reviews, what really matters is songwriting, can the band write a memorable or interesting song. I recently heard a critique on the whole "avant-metal" scene where it was mentioned that you can cram as many ideas into a single track as possible, but it doesn't amount to anything if it doesn't achieve much if it just goes through one ear and out the other. I have to say that outside of a couple of hiccups here and there on here, the band do a commendable job at putting together a group of songs that are memorable and provide interesting listens. I found the album pretty evenly balanced between songs that relied on choruses to provide hooks and songs that were more aggressive but still made use of a melodies that were appealing enough to draw the listener back over and over again.
In the end, I, like it's any surprise at this point, think that this is a really good album. As a fan of more progressive and avant-garde forms of metal, I was obviously inclined to like this album from the start, but I think that this album has potential for appealing to a wide amount of people because of how melodic it is while still being quite unique. Give it a shot if you're a fan of symphonic groups who are different, in a good way. Eternal Deformity surprises me once again.
Overall Score: 9
Highlights: Lifeless, The Sun, The Holy Decay
Posted by maskofgojira at 12:45 AM