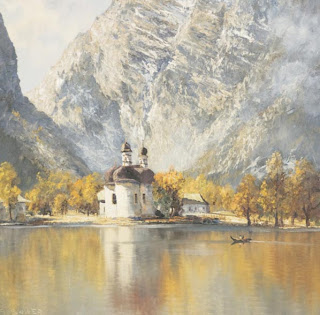 Pantha Du Prince is the pseudonym for German electronic composer Hendrick Weber. Although the official title of his musical genre is minimalistic techno, he combines some other genres along with that. This release can test the patience of some due to it's subtle and smaller details.
If what you were expecting from this album is some big club/rave beats that you can dance to, you have picked the wrong album. This album has it's fair share of bouncy beats, but the overall sound picture features too many small ideas and details that doesn't really make you want to dance. With so much going on in any single given track, this is more relatable to IDM as opposed to more mainstream dance and rave oriented techno music.
Unlike a lot of other music within the techno genre, these subtle little things that occur within this album create a dark sound. Drones and metallic sounds in the background give the entire album a dark and foreboding type of feeling; but the samples used are very playful. Little bells and whistles, children's instruments and other sorts of samples are the main sort samples utilized on here, besides the beats, but that kind of lightens thing up. So the overall vibe of this record can feel, depending on the listener, either playful and light, or dark and mysterious; but you could find both as well.
While this record is full of subtlety, there is still it's fair share of very catchy beats. The beats on tracks like The Splendour or A Nomads Retreat are good enough to get you moving and bobbing your head. There are also plenty of beats that will get stuck in your head, like a good pop chorus, but without the words, and maybe a bit darker.
The nature of the music itself is quite hypnotic at certain point within the songs. In a song like Bohemian Forest or Satellite Snyper, the music can draw in all of your attention and just entrance you. For some this could pose as a problem, as regular dance techno could just play in the background and give it all up to you as just that, background music, while this album requires more attention to detail. You have to listen to the smaller parts of the album as oppose to the bigger and more obvious ones.
The occasional sampled vocals do appear now and then, reminiscing of Pantha Du's more mainstream counterpart. Tracks like Behind The Stars, feature some prominent sampled vocals to provide an almost narrative for the song. While these vocals do weigh the song down a bit, they are not so prominent in any given song to ruin them or detract from the nature of the music itself.
Guest vocals on Stick to My Side are provided by Animal Collective's own Panda Bear. His vocals are sort of just layed across the track, not really bringing a whole lot to the track besides actual vocals, but that's all just opinion. The chorus to this song is actually quite catchy and, at least, makes this a track worth listening to once.
Overall Score: 7.5
Highlights: Lay In A Shimmer, The Splendour, A Nomads Retreat, Satellite Snyper, Bohemian Forest, Es Schneit
Posted by maskofgojira at 8:38 PM