Smouldering In Forgotten - I, Devourer 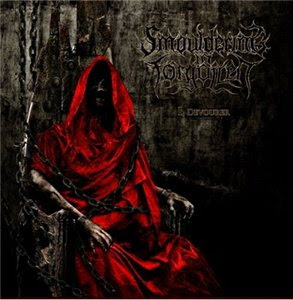 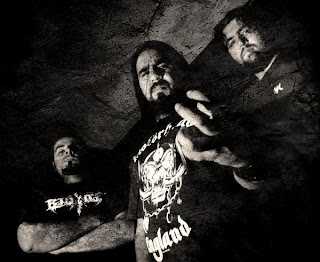 Goatwhore? I Think Not.

Smouldering In Forgotten is a blackened death metal band from Bahrain. For all those who don't know where Bahrain is, it's a small island country in the Persian Gulf, just in case you were wondering. This is their second album and is a bit less like their main influence than you may have guessed it to be.
This is, like the picture shows, a three piece band. Mardus performs the vocals, Voidhanger plays the guitar, bass, and performs back-up screams, and Busac plays guitar and programs the drums. While none of this matters all that much, they do manage to make this sound fairly good. The drum programming never goes into hyper-drive mode with blast-beats that can't even be counted, always at a steady and well placed paces.
As mentioned above, SIF are influenced by, you guessed it, Goatwhore, as well as other bands. Although their sound does have a similar style to that band, SIF are probably more death metal than black metal. The black metal riffs and atheistic are still here in full force, but if that's only a little bit of this record was black metal, the rest would be death metal.
Most of the riffs on here are aggressive and melodic sounding, Unspoken Names. The riffs on here are usually more black metal oriented tremolo picking with some death metal chugging, but that's not often. While this is pretty good in and of itself, nothing really diversifies one track from another enough to really create a different sound.
Mardus' vocals, for the most part, are death metal growls. The occasional scream will come up, but those are most likely done by Voidhanger. One thing that quite a few black metal bands do, and these guys are no exception, is putting kind of ambient parts into their music, and then talking over it. One curve ball the band throws into the album is on Spiritus Nes Sancti, in which some low clean vocals are utilized. Besides that one don't expect a lot of variety within the vocal department, it pretty much stays about the same throughout, but a good example of what they can do is Ash and Tallow.
The final track, An Elegy (For Tomorrow), expresses a bit more adventurous territory compared to other songs on this album. This track features a lot more use of keys, both for atmosphere as well as piano, and a female vocalist. The riffs on this track are also slower and sound heavier than those found on the rest of the album for some reason; they also bring in a guitar solo that is much more melodic. While none of the ideas on this track are really new, they do bring a new idea into the fold.
As mentioned before, the production is actually quite clear, not clean, but good enough to hear everything. The production allows everything on any given track to be heard, from the gruesome growls to the ripping guitars, to the thumping bass. The production might put off those expecting something similar to Burzum or Darkthrone, but even thought this is cleaner than that, don't think that this is pristine, it still has the grit and grime on it.
Overall, this is a decent melodic blackened death metal album. You won't find a lot on this album that you won't find on another, but if you're a fan of the style, you'll probably check it out anyway. The Goatwhore reference isn't as prevalent as you might think, but it is there in a few tracks.
Overall Score: 7
Highlights: Dead Messiah, Unspoken Names, Spiritus Nes Sancti, An Elegy (For Tomorrow)
Posted by maskofgojira at 4:39 PM