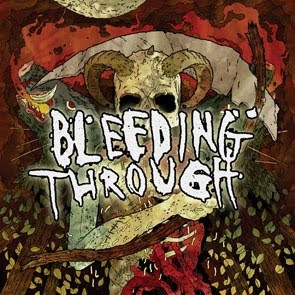 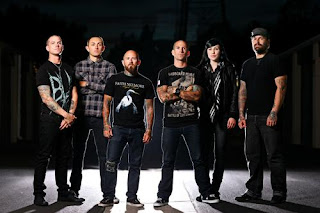 Blackened to The Core.

Bleeding Through is a symphonic black/metalcore band from California. Having spent the their career moving through the metalcore movement of the early 2000s, they are one of the genre's fore-fathering bands, and like most of the founders of any sound, they've evolved into a newer sound. This newer sounds was really first presented on their last record, 2008s "Declaration."
As was just stated above, the sound of this album was first presented on the band's last record, and while this sound is not the most original thing out there, it was probably the first introduction to this style that many of Bleeding Through's fans had ever experienced, and that sound is black metal/symphonic black metal. Once again, to reiterate, this is not an brand new sound, but one that did effect the sound of the band. Vocalist Brandan Schieppati's use of higher screams and the bigger presence of the keys in the mix of the sound brought some of these darker and blacker vibes into the sound. Guitar solos and tremolo picking also were introduced on that album, the first time the band had made those things as prominent of the sound.
This new album picks up where that album left off, you still have large Dimmu Borgir/Cradle of Filth symphonic keyboards, screamed vocals, tremolo picking riffs, and blast beats. These elements are perhaps more prominent that on the previous record though, with an even more aggressive tone, but an overall less dark sound compared to that one. That could be attributed to the less atmospheric production that Zeuss gave the band compared to Devin Townsend on the last record.
While the black metal elements are ever persistent and becoming more and more integrated into the band's sound, the hardcore elements are still at the core of. Breakdowns have and will always be a part of Bleeding Through, listen to the end of Fifteen Minutes. You also still have your gang shouts or chants that remains at the heart of the band, so fear not if you're concerned for the loss of the band's root sound. Probably the song that demonstrates a perfect mix of the band's metalcore and hardcore roots mixed with their new black metal leanings is on Breathing In The Wrath, where every element of the band's core sound is present within the chants and breakdowns, but the more symphonic sound is still present.
While the majority of the vocals on this record are scream, shouted, and/or growled, cleans are still within, though very seldom. The first showcase of the cleans are done on Salvation Never Found, and not by Schieppati, but by bassist Ryan Wombacher, whose first vocal performance was on the last track of "Declaration." In fact, this album lacks Schieppati's trademark clean voice and is replaced with Wombacher's almost auto-tuned harmonies taking the reigns on the cleans. The only exception to this is in the chorus of Distortion, Devotion, where Schieppati doubles his harmonies with Wombachers.
But while being the band's most black metal and symphonic record yet, elements of "The Truth" are still found every once in a while. The almost technical groove on Divide The Armies or Slow Your Roll bring back the death metal sound from a few of the tracks on that album. The few sections that contain clean vocals are where the band manage to bring the most melody back into their playing.
Overall, this record is a step into a more aggressive and black metal oriented sound, but the melodic side of the band that made them one of metalcore's shining stars is slowly dying out. The vibe of this record is nowhere as catchy or memorable as "The Truth" or as dark as "Declaration" but builds upon them. A good record, but not their best.
Overall Score: 7.5
Highlights: Anti-Hero, Fifteen Minutes, Salvation Never Found, Divide The Armies, Slow Your Roll, Distortion, Devotion
Posted by maskofgojira at 7:43 PM