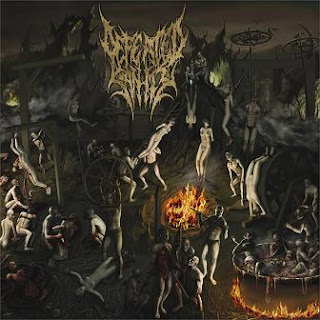 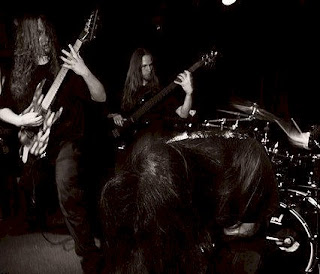 Grinding Till There's Nothing Left.

Defeated Sanity is a brutal death metal band from Germany. Having been formed back in 1995, this is only their third full-length album. This is also the first album to feature new vocalist A.J. Magana, formerly of Disgorge.
If what you're expecting is something similar to a band like Death or Cannibal Corpse, or old-school death metal, you're gonna be disappointed. If what you're expecting is a band like Whitechapel or Job For A Cowboy, you're dead wrong. This band is brutal and technical death metal, in the vein of old Aborted, but think rawer production, audible bass, and deep guttural vocals.
Lets focus on the guitars on here, they're chunky and beefy sounding. Most of the riffs that Christian Kúhn plays are either beefy sounding breakdown sort of chugs or technical grind stuff that becomes fairly hard to distinguish one riff from another, though that's pretty much the genre of underground brutal death metal for you. But it must be said that the guitars are more clear than on Defeated Sanity's previous releases. Not a lot of high-end stuff is used on here, mainly chunky low-end work. The only real solo, I found, on here was in the last track, Lurid Assimilation, and that was pretty quick and played fast.
The bass on this record is played very well, that must be said. Not only is the bass very clearly audible in the mix, sometimes even more so than the guitars, but the bass is actually quite jazzy sometimes. Jacob Schmidt's bass fills are frequently utilized, listen to Carnal Deliverance, and are done well enough that they sound like they're part of the song, not just added in for him to do something more. Another thing, kind of contradicting the last sentence a bit, is that the bass actually keeps up with the guitar well enough to kind of make the guitar's low end beefier.
The drums are also played rather well. Lille Gruber throws in a lot of different fills and cymbal play throughout the record, listen to the little jazz part in Consumed By Repugnance. The drums are also high up in the mix, to a point where I think it's louder than the guitars, so that might turn some off to this, if you're expecting a lot of guitars at the front of the sound.
Vocalist A.J. Magana performs, if you've heard his older bands, his typical low guttural vocals style. Most of these vocals are probably inhales, you can tell I don't listen to a lot of this style. His style, overall, is mainly the inhales and some more goregrind-like toilet-bowl vocals.
Most of these songs, I would assume, are made to sound chaotic and wild sounding, brutal and technical in another sense, and they succeed. Most of these tracks feel like they lack structure, being just riff after riff. The musicianship of these players is good, but it might just be the mix that makes this sound so muddy.
Overall, this is a decent record, being not the biggest underground brutal death metal head, there, I admit it. But this has a lot of cool drumming and bass work that reminds me of some of Cannibal Corpse, the bass. If you're a fan of BDM (brutal death metal), chances are you already know about this band, so you don't need me telling you to check them out.
Overall Score: 7
Highlights: Carnal Deliverance, Salacious Affinity, Engulfed In Excruciation, Blissfully Exsanguinated, Lurid Assimilation
Posted by maskofgojira at 6:08 PM