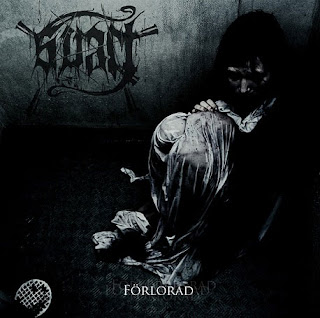 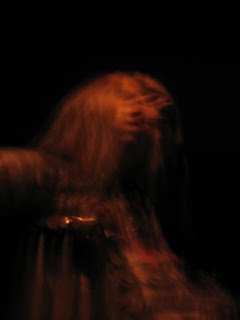 Svart is a one-man depressive/ambient black metal project from Sweden controlled by Draug. This new record is his second full-length, previous EPs have provided close to an hour worth of material. This record contains all the things you would expect from this sort of music, but there's something to be said for the quality of this record compared to Draug's peers.
First of all, this record is made up of only 3 tracks, they can hardly be considered songs, each growing longer than the previous one before it. The first track, I, starts at about 14:30 minutes and each of the 3 tracks builds upon the length and the ambiance more and more until the final track. Because of the nature of this style of music, and the length of the tracks, one can expect to either become entranced by these songs or be bored to tears.
The first track builds slowly, with simple chords and root notes being either strummed or plucked over and over, echoing. Drums don't enter until just after 11 minutes and they follow a slow marching-like pattern with guitars still echoing. During certain parts, the drums appear to build up towards an incoming climax, but the guitars never make that aggressive black metal climax come out to the surface on this track. For one to fully enjoy this track, you must allow yourself to become fully enveloped by the echoing guitar patterns. The vocals on this track are very distorted and are spoken.
Track two, II, builds up from where the first track left off. This track brings the bass into the fold, where it is fully audible. Distortion even enters this track fairly early in the track. While a typical black metal fan might not even call this black metal, due to the slow nature at which the tracks progress, the entrance of distortion brings a sort of aggression into this track that wasn't demonstrated on the first, it brings to mind a very funeral doom atmosphere. Real vocals emerge in this track as well, and they fit the funeral doom vibe by being very low death growls and very melodic cleans.
The final and longest track, this one is just under 40 minutes, is the best and most entracing track on this record. The guitars on this track move back to the more clean sounding and echo based vibe of the first track, but have a much more melodic tone to them. While the previous two tracks seem to flow from one section into another, like I mentioned before, this song is more melodic, and it returns to a central chord progression that is quite hypnotic. Vocals on this track also return to a distorted spoken word style, but fit much more within the context of this track than the opening one, they also feel a bit better placed as well.
This record is very minimalist, obviously coming from funeral doom/ambient black metal, but features a sound that is not as dirty and gritty as some of Draug's peers. It's not that this is the cleanest record ever, but due to a lack of grit, this record comes off a bit more listenable than most of the records from guys like Trist. Repeated listens are much more foreseeable with this record when compared to come of the other bands within this genre.
Overall, this record is a very good representation of what funeral doom and ambient black metal should sound like together. The slow and repetitive nature of the music is perfect for the style and never loses the attention of the listener, if they like this sort of music. While this not be my favorite black metal record of this year, it's one that had exceeded my expectations. Check this out if you like doomy and atmospheric black metal.
Overall Score: 8
Highlights: II, III
Posted by maskofgojira at 6:09 PM