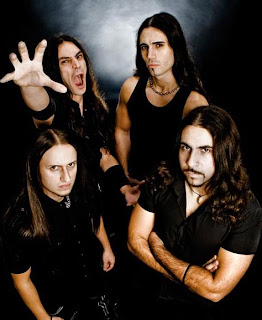 Just Another Burning Cross? I Think Not.

Hour of Penance is a technical/brutal death metal band from Italy. "Paradogma" is their fourth full-length album and marks another leap forward for the band's sound. HoP is a band that has gained a considerable amount of recognition from extreme metal press for their take on brutal death metal.
Hour of Penance's sound is considerably more tolerable than some other bands in the genre. One thing that makes this fact so is vocalist Francesco Paoli, whose style brings to mind elements of more classic death metal vocalists like George "Corpsegrinder" Fisher from Cannibal Corpse, Karl Sanders of Nile, and even a bit of Barney from Napalm Death. Unlike a lot of death metal, and death metal sub-genres, vocalists nowadays, he can pull a Corpsegrinder and spit words in a death growl that you can understand and a said fast.
Musically, this album expands upon the more technical approach taken on the band's last album, "The Vile Conception," giving the music a bit more structure, and even melody; but not in a melo-death/metalcore way. The way melody and structured songs should be looked at on here is in the same way a band like Cannibal Corpse started writing more focused songs on "The Bleeding" or on Dismember's "Massive Killing Capacity." Songs are, in the words of ex-Cannibal Corpse member, Jack Owen, "Songs are more arranged, deranged."
While songs like The Woeful Eucharisty and Malevolence of The Righteous are still brutal, more melodic guitar leads and good, hooky choruses are added into the mix. A song like Caged Into Falsehood or Incestuous Dynasty of Worms are more in the band's technical and brutal style, retaining a very blast-beat and technical guitar ridden tracks. These two sides are balanced in a way that will surely win the band over a lot of new fans, but still appease the older ones as well.
As one could probably guess from the album art, this album's lyrical content is directed against religion. Don't interpret this as a Glen Benton kind of thing, think more in vein of a band like Immolation, whose influence can be found on a track like Spiritual Ravishment in the bit of atmospheric parts during the song. The lyrics are not so much against just Christianity, as much as against religion in general.
Overall, this is a very good death metal record full of lots of hooks. I would consider this album to be the band's "The Bleeding" due to all the catchy songs contained within. Any person who considers themselves a death metal fan should definitely check this album out.
Overall Score: 8.5
Highlights: Paradogma, The Woeful Eucharisty, Malevolence of The Righteous, Incontrovertible Doctrines, Spiritual Ravishment
Posted by maskofgojira at 10:14 PM