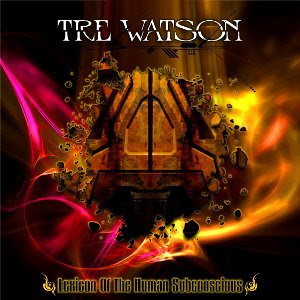 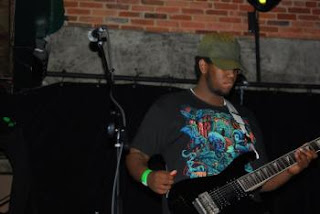 Play Em' Off You Swinin' Cat.

Tre Watson is a guitar player from Maryland. This is his debut record as a songwriter, re-mixer, and producer, as well as guitar player, and demonstrates influences from the newer and upcoming tech metal scene. On this album you'll find that tech metal style and influences from other genres.
Just to be clean on what this album is before you check this out, it is instrumental. Only 1 song on here has vocals, and that's a remix of a song by another artist. For some this might not be their thing, due to it being only music, and not having vocals, but this guy knows how to play some cool riffs. Influences from electronic and prog have definitely seeped into the style of this record, as well as the obvious Meshuggah style.
Dilate is the first track. This is just a short introductory track with a storm behind some clean guitar playing. While this is not overly spectacular, it's a nice intro for what it is.
The second, and real first track, UFAILien is where things begin to move. This track is filled with the Meshuggah styled chugging and Dream Theater virtuosic progressive nature. This track has some worthwhile riffing and a nice chorus melody. The weird section at the end of the track sounds odd but that flows into the next track.
That Which Is Past Predicts F is the next track. This track is a bit weirder sounding, less structured, comparisons to Dillinger Escape Plan are definitely in order here. More frantic sounding riffs and dissonance is prominent. The final section in this track slows things down and that really is the best part of the track.
Charmander Used Flamethrower! is the fourth track. This track has some cool low-end work done on it, along with the main riff. The breakdown on here is spectacular, for a breakdown, and moves into a black metal part, which is quite odd. The song ends in a melody from a children's song, weird.
MFT is the next track and is more like Converge meets Periphery sound. The overall vibe is quite straightforward and melodic, but has some crazy sounding riffs that reminisce of some of Converge's stuff. The solo on here is quite good as well.
Tears of The Almighty starts with some ballad piano work before the main riff is played on guitar. This is probably the most melodic track on here, but it moves from piano to guitar within it's cycle at odd times. The riffs are catchy and stick in your head more than other tracks do due to the track being under 2:30 minutes.
Image Construction Error is also quite melodic. This track has some quirky synthe done on it, to where it sounds like it came from a Mario and Luigi game. Dan Park's keyboards really make this an interesting track. The solo is performed really well until the keys cut it off at the end, but this is overall a highlight.
Hopefully Working is the next track. This track feels like earlier tracks but features some cool clean guitars in the background. This is one of the more straightforward sounding tracks on the record, not really going too crazy.
The next song is Breach of Consent. This is the shortest track on the album, being just over 2 minutes. It really sounds like long bridge section, moving from a heavy and technical breakdown into a solo then into dissonant riff before going all melodic, then it repeats. Short, but good.
The tenth track is Conflicting Intentions, and this is a thrash song. Moving very quickly and having some old Metallica meets Slayer vibe to it. As if this track wasn't the highlight on the record, the solo is the best on here as well. This is the longest track on the album, and the material on this track really justifies it. From the softer and clean guitar parts in the middle of the track to the heavy and melodic soloing, this is the highlight of the album.
The final track is the only track with vocals on here. Lady Gaga - Telephone, is exactly that, Lady Gaga's Telephone, but remixed into metal. While it might not be the best performed track, the riffs that Tre plays on it are actually very melodic and make that track a LOT better than it's original form.
Overall, this is a good debut. Full of djent/tech metal progressiveness and melodicism, fans of this new movement will enjoy this as much as the genre's forefathers. Check this stuff out.
Overall Score: 8
Highlights: Charmander Used Flamethrower!, MFT, Tears of The Almighty, Breach of Consent, Conflicting Intentions, Lady Gaga - Telephone
Posted by maskofgojira at 3:48 PM