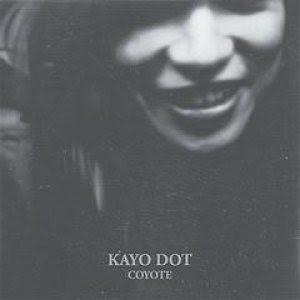 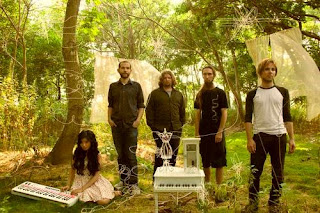 Kayo Dot is an avant-garde/jazz rock band from Boston. This record is their fourth, coming after the recent reformation of main members, Toby Driver and Mia Matsumiya, former band Maudlin of The Well. The style from that record seems to carry over a bit into this new recording.
The sound of this album was described by Driver as goth fusion. He sites influences that include The Cure, Bauhaus, Faith and The Muse, Herbie Hancock, and Scott Walker to have had a place in how he wrote this album. In his words, this album was written to also be a single narrative piece that flows together without breaks.
The concept of this album was originally written by Driver and a film maker named Yuko Sueta and was originally performed as a film with musical performances along with it. Sueta was diagnosed with breast cancer shortly after the performance and Driver decided to adapt the composition for Kayo Dot. Sueta died during the latter stages of the album and the album is such dedicated to her.
The first track, Calonyction Girl, is very bleak and dark sounding. Percussion is very sparse sounding, while most of the melody is provided by the brass horns. Driver's vocals are very reminiscent of Scott Walker's crooning style, although Driver is a bit less of a crooner and more of a spoken singer, if that makes any sense. The track moves through a lot of different vibes, but retains it's darkness throughout.
The second track is Whisper Ineffable. This track continues from where the last one left off; beginning like a jazz song, but much more ambient and dark. This track has an overall much more gothic feel to it, with keys becoming very prominent in the overall sound, along with the violins. Drummer David Bodie is furious on the kit in this song; his playing is very frantic and uncontrolled sounding. Unlike the last track, this track ends in a very slow and ambient sounding way; and although some may not hear it this way, it sounds almost morbid in the way it's being played.
Abyss Hinge I: Sleeping Birds Sighing In Roscolux, is the third track on here. This is a short instrumental track that is also probably the heaviest moment on this album. You'll find a lot of psychedelic feeling within this track that leads into the next one as well, but odd guitar melodies are what really makes up the sound on here, along with ambient keys and some cool drumming. The ambiance really progresses as the track goes on and on, gradually becoming louder, then quieter, before moving into a jazz part, really odd.
Abyss Hinge II: The Shrinking Armature is the next part of the album, and the continuation of the last track. Bringing back the odd jazz horn section from the end of the previous song, and mixing it with some weird psychedelic elements in the guitar and violin playing as well. This track perfectly melds together the influences that Driver mentioned, both the composition and Driver's vocals really sound like Scott Walker's "The Drift" record. The elements of psychedelia from Herbie Hancock are also ever present throughout the track along with the dark, kind of vibe from Faith and The Muse and The Cure. This track is really the perfect melding of every influence he mentioned.
The final track is Cartogram Out of Phase. This track is probably the most odd on the record, the ugly duckling, just due to it's very odd elements. From Driver's singing to the mellotron(?) in the background and the horns in front, this song is just very hard to make anything out of really. It doesn't quite live up to the 2 tracks that just preceded it, but it doesn't really make the earlier tracks feel awful as well. Each listener will have their own perception of how this track sounds.
This album really mesmerizes the listener into a sort of trance, ever drawing them into the sound and pushing them back out. While by no means is this some sort of ambient piece of music that is quiet, it is also not at all metal, and like what was stated above, it kind of takes away from the Maudlin of The Well album that was released last year, "Part The Second," in the way that it is very built upon building upon itself, sonically ever growing. For a listener to fully appreciate this album, they must kind of shut themselves off from everything else around them. This album is very complex and dark sounding, background music is not what this was meant for, it will take the listener on a journey.
Overall, this is a very unique sounding album that is unique, even for Kayo Dot standards. As the band has seemed to grow less and less heavy, they have managed to grow more and more beautiful and dark. Even if you're not necessarily into avant-garde or jazz music, it is still worth checking out and listening to a track or two.
Overall Score: 7.5
Highlights: Abyss Hinge I: Sleeping Birds Sighing In Roscolux, Abyss Hinge II: The Shrinking Armature, Cartogram Out of Phase
Posted by maskofgojira at 5:59 PM