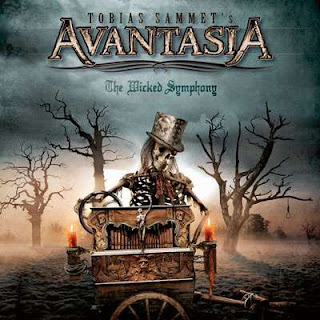 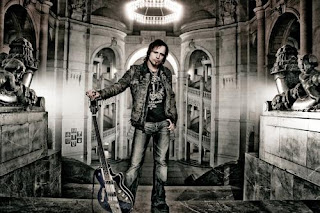 How Many Guests In One Record, Pt.I.

Avantasia is a symphonic/power metal band by German power metal singer, Tobias Sammet, of Edguy. This record, and the one following it, are parts 2 and 3 of the story he started with 2008's "The Scarecrow." Like that record, this one, and the one coupled with it, have a lot of guest appearances on it.
The first song on this album is the title-track of this album, The Wicked Symphony. This song is just under 9:30 minutes long and features guest vocals from Jorn Lande, of Masterplan and his solo work, and Russel Allen, or Symphony X. This is a very typical sounding Avantasia type of song, epic symphonic arrangements behind simple, more rock based riffs. Throughout the track, a very 80's vibe hovers overhead, a bit cheesy, but still good.
The next song is Wastelands, featuring Michael Kiske, ex-Helloween, ex-Gamma Ray on vocals. This track is based on a very driving beat carring the song. This track is littered with guitar solos and a big sounding chorus, arena rock at it's finest.
Scales of Justice is the next track. This song features ex-Judas Priest, ex-Iced Earth vocalist Tim "Ripper' Owens on it. This is much more of a metal based song, still maintaining an almost 80s vibe. Near the last minutes of the song, the main riff goes into full 80s rock mode, with a riff that could have been in a Whitesnake song back then.
The next song, and also the first single, Dying For An Angel. This track features legendary vocalist, Klaus Meine of the Scorpions, providing a good amount of the vocals. This track fully embraces the 80s feeling that has permeated the sound of this album so far.
Blizzard On A Broken Mirror is the next track, and features ex-Angra vocalist André Matos. This is one of the heaver track on the album, with a driving metal riff and plenty of guitar solos. This track goes through a more mellow phase where the more symphonic elements of the band come out to the forefront.
The next song is another epic, Runaway Train, once again featuring Jorn Lande, Michael Kiske, and Bob Catley. This track has a bit more of a ballad feeling, a power-ballad mind you, but much more mellow and sorrowful than the other tracks. Like all good power-ballads, the chorus is huge and catchy. More string arrangements are present on this track than previous ones, as well as the presense of a piano. The whole song ends in multiple solos, including a key solo, a bit of a prog edge comes to the front by the end.
The next song is Crestfallen, another song with Jorn Lande. This is possibly the heaviest song on the album, the chorus being extremely dark sounding with low harmonies underneath Sammet's voice. The melodies present on this song add to the dark feeling in the chorus, proving to be the darkest song, overall, on this record.
The eigth song on this record is titled Forever Is A Long Time. This is Jorn Lande's last appearance on this album. This song is much more up-beat compared to the previous track and is more of a rock song. Along with being a big sounding rock track, the vibe is totally Whitesnake, and Jorn's voice only adds to that vibe.
The next track is called Black Wings, featuring Ralf Zdiarstek, most well known for his voice on earlier Avantasia albums. This is a slower track that has a lot more emphasis on keyboards in the background then previous tracks did. This track mellows out in the end and the symphonic style of the band enters, yet again.
The next track is States of Matter with Russel Allen. This track has a bit of a traditional power metal/hard rock vibe to it, more simplisticly written. The solo in this track and the short riff that leads up to it is fairly proggy, while remaining still very rockin'.
The final song, The Edge, is the only song without a guest vocalist on it. This is another power-ballad song with another big sounding chorus. Tobias completes this album with a big, rock song that fits perfectly as a completion song. For those who've listened to this track, waiting for Tobias to sing solo, this is for you.
Overall, this is a good 80s rock mixed with power metal album with a lot of good songs. Whether you're into heavy metal solos, big choruses, or 80s-esque hard rock, this is something to take notice of. Check this out if you haven't heard it yet.
Overall Score: 9
Highlights: The Wicked Symphony, Dying For An Angel, Runaway Train, The Edge
Posted by maskofgojira at 4:58 PM