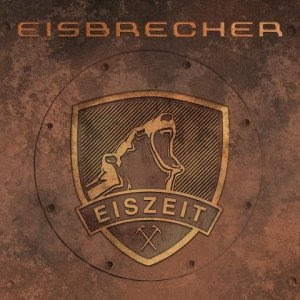 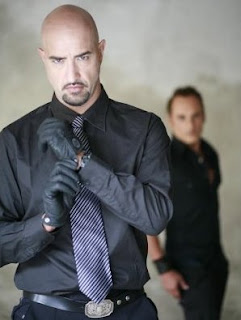 I Know Who You're Thinking Of.

Eisbrecher is an industrial rock/metal band from Germany. Taking the sound made famous by the world renowned Rammstein, and making it more melodic, you can guess what they sound like. You'll get the same amount of heavy, even more catchy.
This band contains only two real members, with several others filling in on live performances. Vocals are performed by Alexx Wesselsky and guitars and programming duties belong to Noel Pix. The two got together after Alexx left his old band, Megaherz, and the two decided to collaborate together.
This band pretty much sounds exactly like Rammstein, from the heavy groovy riffs to the heavy German singing. Industrial and electronic elements hang on the edge of every song, bordering the band onto full on industrialism. The grooves make the songs heavy enough so that even a non-metalhead can get into them.
Lyrics are fully in German, another Rammstein comparison, and keep things fairly difficult for people who don't want lyrics that aren't in English to listen to. If you can take the foreign lyrics, the vocals are deep and heavy, but also melodic, probably more then Rammstein's are. There are also some female vocals that have been included in some of these songs, like in the bridge of Bombe, the vocals are synthesized repeating the chorus.
Whether you like it or not, you'll find several of these tracks either getting your head to bob or get these choruses stuck in your head. The heavy dance tracks like Amok with get your foot tapping the floor with rave beats, while the rocking tracks like Die Engel or Böse Mädchen will get themselves stuck in your head. Different things will be for different people, but that's what made this band a success in America.
The collaboration track, Gothkiller (Eisbrecher vs. Roberto Vitacca), is fully sung in English and is probably the most accessible track on here. This track is more of a dance track than an industrial rock song; with club beats and sampled female vocals. The solo in this song in feels very 80s, which this entire track gives off, somewhat of a throwback track in retrospective.
Overall, this is a good record if you're looking for a bunch of catchy songs. The 80s throwback element on this album really gives it a different vibe to some of the other industrial rock/metal bands nowadays. Whether you want a good time listen or some heavy anthem rock songs, check this out.
Overall Score: 7.5
Highlights: Böse Mädchen, Eiszeit, Die Engel, Amok, Dein Weg, Kein Wunder
Posted by maskofgojira at 2:04 PM