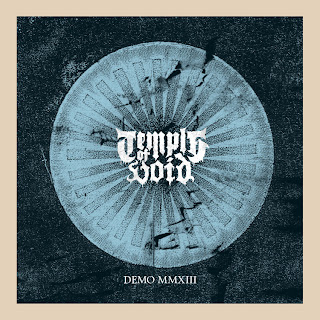 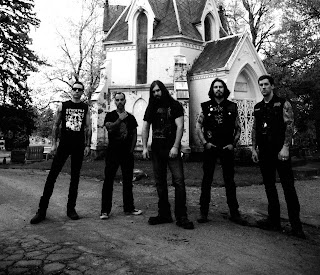 I don't cover a lot of demos, for whatever reason, and was quite surprised when I was suddenly sent an email asking me to cover one. I remember just looking at the cover for this demo and replying to the band asking them if it was actually a demo or an EP (different ratings for those not aware) and them replying by informing me that this was indeed a demo. Looked more like a professional EP to me, but just goes to show what I know based off of a cover and production.
One can hardly blame me for thinking this was an EP. Maybe it's just my preconception of what a demo should sound like. When I think of that term, I think, raw production, noisy production even, really dirty sounding, maybe even a mix that sounds shitty - if a mix was even done. Maybe I'm just stuck in the 90s, whatever. The sound on this is undoubtedly quite clean, though not polished, and it does suit what the band are doing. Death-doom can work in quite a lot of different types of production from the noisy lo-fi to the clean and polished sort, really, all it needs to be is heavy. That low-end has to come through, and if nothing else, this band accomplishes that on their demo. But that aside, I was actually surprised by how this band approached song writing. On opener Beyond The Ultimate, both guitarists have several sections where they're working with completely separate parts, not so much in harmony or disharmony, but I just thought that was sort of odd to hear. Usually, most doom oriented bands keep things slow going and don't like to surprise the listener with different parts, but hell, I certainly give the band a thumbs up for that nugget on here. I can't lie and say that I didn't find some of Exanimate Gaze to be overly repetitive, but I'd say that beyond that and the spoken word vocal used to close the first track, the band is off to a pretty good start.
There isn't too much to say beyond that. This band is clearly working with a formula that has been tested many times and yet these guys still have something there that grabs my ear when I listen. I don't think the band have hit that potential yet, but these three songs are definitely a nice starting point for them to leap off of and find that signature sound. So if you're a fan of doom and death metal, certainly look into this.
Overall Score: 5.5
Highlights: Beyond The Ultimate
Posted by maskofgojira at 4:43 PM