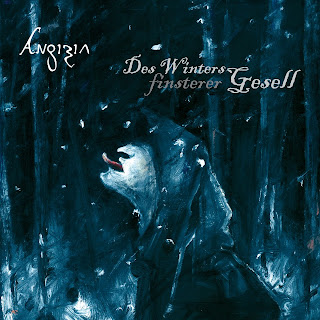 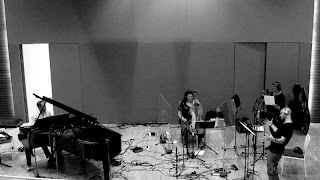 I've been aware of Angizia for quite a while now and have been quite fascinated with their progression in sound over the years. The band's 2011 album Kokon. Ein Schaurig-Schönes Schachtelstück continued their trend of using less metal, or rock based, instrumentation on their albums. But simply because of the darker vibe of this cover, I got the impression that this would be a bit more "aggressive" than their last few.
Because the cover was a little bit darker you could forgive me for assuming that this might be a return to the band's more metallic side. As the last couple of releases have been a bit more focused on the theatrical end of the spectrum, possibly telling a story (I don't speak Austrian) with very little use of distorted instrumentation or even harsher vocals, but this record certainly sees the return I had hoped for. While that theatrical bend is certainly still alive and well on here, it's nice to have a bit more balance between more gothic set metal tracks and more cabaret inspired avant-garde compositions. When the two are combined, it makes for a strange dynamic that can really only be found in bands of this nature (avant-garde I mean) and I love it. A track like Anatol goes from very bizarre accordion led sections to heavier, and possibly more over-the-top, metal ones and it's just as weird as anything I've heard this year. I love the absurdity and how unorthodox it is because it makes me laugh whenever I listen to it. Laugh because it's great and fun to listen to mind you.
As always, this is less of an album of songs and more of a single piece of music that is split down into fifteen separate tracks. So as you might expect, telling when one track ends and another begins can be somewhat difficult when you're not paying attention to the numbers changing on your music player. It's not as if the band go out of their way to help you either, with interludes popping up like they would be played at the beginning and/or end of a track being their own tracks all together. In addition to that, the entire album flows in mood so it's not as if one track may be more upbeat and aggressive and then the next will be more morose and somber, the mood will change throughout a single track. This isn't a qualm I have with the album mind you, but it is something that needs to be addressed.
Now, there's a central problem I typically have with an album like this and that is the use of a female vocalist. I have no qualms with female singers or growlers, but merely how they are used. There are so many band in the symphonic, gothic, and/or power metal genres (the first two could apply to this band) that have female singers who use an operatic style which is all well and good, but 1) can grow old very fast and 2) I just find really obnoxious. I guess the saving grace for this album and band has been that while the female operatics are used throughout, they are counter balanced with more of a black metal wretch. Not a new idea by any means, but well executed none the less. Tracks like Flügelspiel and Zügellos only work so well because the two are paired together.
While this may not be an album for everyone, certainly not everyone is going to get into the whole cabaret thing, I thought it was perfectly good fun to listen to. The orchestrations are nice and diverse throughout so it never got boring, and even at it's most over-the-top, it never became annoying. Definitely check this out if you're a fan of more avant-garde metal bands.
Overall Score: 8
Highlights: Anatol, Flügelspiel, Zügellos, Das Leere Grab
Posted by maskofgojira at 8:46 PM