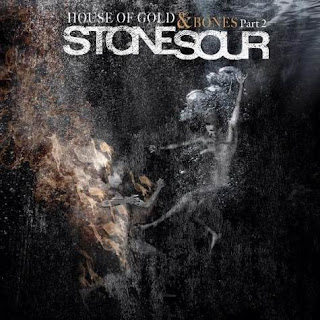 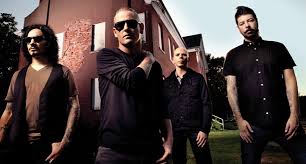 I've always been an admirer of Corey Taylor's work in Stone Sour more than his work in the infinitely more popular Slipknot. While my interest in the former band has seriously waned in the last couple of years, I still find myself returning to Stone Sour. In the world of mainstream alternative rock and metal I can tolerate these guys far more than many of their contemporaries, even if their last two albums really haven't done much for me.
Concerning the first part of this "double-album", if you look back at my review of it from last year, it should be clear that I was pretty unimpressed by what the band had done. While the sound was certainly a return to the heavier sound that the band had on their self-titled debut, but lacked the memorability of that album or its follow-up, 2006's masterwork Come What(ever) May. As I clearly stated above, I felt like both House of Gold and Bone Part 1 and the previous album 2010's Audio Secrecy were a let down in that regard. Yet, almost immediately after I pressed play and opener Red City began, I felt like I was hearing the band at the top of their game again. That track is really something unexpected, with the band transitioning between a more somber and melancholic introduction and a brutally heavy metal middle in a way that I had never imagined the band even attempting to take on. The following tracks continue the trend with the darker tone and heavier sound that was used on the first part of this album. The main difference between these two albums for me though, besides the darker tone, is that the songs on this album are far and away among the best the band have produced since their 2006 masterpiece (of mainstream metal/rock). For me, it's power is undeniable, the majority of these songs just kick ass.
While the previous part of this album was definitely the heaviest thing the band had released for quite some time, I felt that it's heaviness didn't make up for the lackluster songwriting. This album not only has the heaviness from the first part and the songwriting, but also diversity. Whether it happens to be more barnburners like Stalemate and Gravesend or straight-up rockers like Black John (which has some serious stomp) and Do Me A Favor, but you also have those softer tracks (which have actually been some of my favorite tracks the band has ever released) like the unexpected Sadist. Frankly, I was actually impressed with the spacey, acoustic interlude Blue Smoke and sort of wish that the band would have developed it into a full song because the soundscape they created was actually pretty well done. Though variety has never really been a part of the band that I've worried too much about since all their albums have had their heavier and lighter side, but on here I think the dichotomy between light and dark is a lot clearer than ever before. I know that that isn't something a lot of people may care about, but for a band who I've thought had abandon their darker tone in favor for the lighter one that was more accessible, this was a nice refresher to remind me that this band does have a dark side. I mean, this is definitely not as dark as the first album, but as I'm been rambling on about, it's their darkest since.
I'm not going to write this up and tell you that this is a masterpiece, because it isn't but I do think that this is some of the best material the band has released in years. The songs on here are consistent in quality where not a stinker exists. Stuff as mainstream as this will obviously not appeal to everyone, but if you're looking for some mainstream metal/rock that actually has some balls and isn't just copying everyone else, maybe give this a listen.
Overall Score: 8
Highlights: Black John, Peckinpah, The Uncanny Valley
Posted by maskofgojira at 4:33 PM