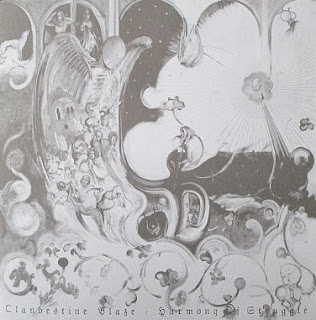 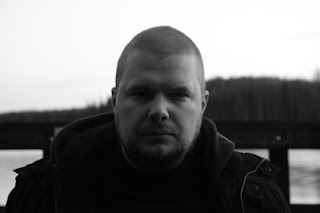 Mikko Aspa is a busy and prolific guy. Whether it's Deathspell Omega or Stabat Mater or Creamface, he works in many different styles and manages to produce good results in all of them. For the longest time, Clandestine Blaze has been his mainstay project, but after three years, or so, of silence, a new album has finally emerged.
I have to say, while I have never exactly been the biggest fan of Aspa's output with Clandestine Blaze, it is still a project I will acknowledge for having it's place in my collection. It's position, musically, has always seemed to dwell within more of a straightforward black metal style, rather than experiment outside of it like his work in Deathspell Omega has. Though production quality has gone up with each release, the quality of an entire record has always been more meh for myself. Anyone who reads this blog enough will know that I tend to like the more experimental and adventurous side of the genre, but being direct has its place as well. When listening through this album, aside from some production choices, it's hard to really say the focus of the project has shifted since its inception. So, while the overall tone of the record feels a bit more ambiguous, for a while it led me to think as though Aspa might be taking the project into a "post-black metal" style, and the drums are a bit more punchy, you're still getting more or less the same, aggressive approach you've gotten from a Clandestine Blaze record in the past. I'm not saying that's necessarily a bad thing, but it isn't exactly my favorite situation.
One has to admit that there is a certain charm in the punky edge of a song like Face of Granite or the serpentine nature of Wings of The Archangel, but they are ultimately just momentary pleasures. They provide enough enjoyment to perk up the listener's ears for a couple of listens, but they don't have long terms staying power, which, is this album's biggest problem. Maybe it's because I just never had the biggest affinity for this project to begin with that none of its songs really stuck with me for even the duration of an entire album, but once a songs ends I more or less have forgotten what just happened during it. I also have a problem with the kick drum mix on here. As I said above, the tone is definitely more punchy, but the kick is just way too loud and winds up overpowering the snare and some of the other tom and cymbal work when they're being played at the same time as the kicks. Now, that isn't to say that there aren't things that I find admirable about this. The final minute of Autumn of Blood and Steel features a nice atmospheric guitar line running along with the main distorted one that I found quite interesting and the atmosphere over the entire album is pretty solid and deserves mention as well.
So for it's duration it's perfectly fine, but it isn't exactly anything memorable or long lasting. Fans of black metal, done in more of a direct and traditional style, will probably dig this, but I doubt it's going to be well considered even in their eyes. So, check it out, find some good tracks, but I wouldn't expect the world from it.
Overall Score: 6.5
Highlights: Face of Granite, Wings of The Archangel, Autumn of Blood and Steel
Posted by maskofgojira at 1:06 PM