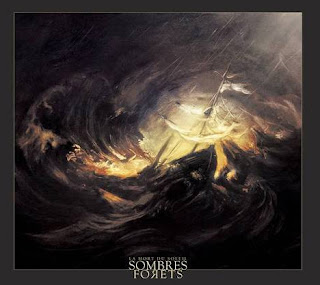 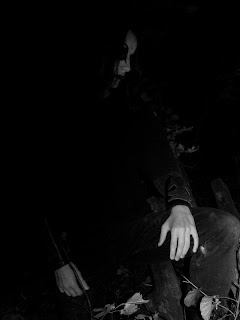 This, tied along with Gris, were two bands who I just happened to find out about in a Youtube video about Canadian black metal. There are several videos of this sort on that site, but when I first saw it, there were fewer so finding out about these bands felt like discovering more of a cult thing than it is now. But this was the first new album from the project in several, thus making it the first new album I was able to hear from them.
I think that the first, and maybe the most obvious, change on this album compared to the two previous releases that were put out is simply the production. This album is undoubtedly cleaner sounding and less harsh in its choice of tones. Sure, the sound is definitely still very aggressive and abrasive, but you aren't going to find that lo-fi guitar tone on here, the drums come across as more well placed, mix wise, and the vocals, I found to be, more tolerable. On the previous two full-lengths I did feel somewhat of a connection to the whole depressive black metal scene that was sort of blowing up in the mid 2000s and that mainly came from the vocals. Musically, Sombres Forêts always reminded me more of those classic early records from atmospheric black metal groups like Lunar Aurora or Ulver, or, and maybe I'm stretching here, the first few records from Opeth. It was more the vocals that I felt lent them that depressive tag. But with this new record, I think they've created one of the most refreshing "post-black metal" records in a long-ass time.
Whether it was intentional or not, there's a certain tone and structure to this record that I would compare to the whole post-black metal one, there are peaks and valleys in nearly every song on here; and while there isn't a whole lot that I found referenced post-rock or shoegaze or the other styles that are so typically associated with that sub-genre, there certainly are similarities in the way some of the songs are put together. The former genre certainly has more of a presence on here than I ever expected it to, but that doesn't mean the project's sound has completely changed.
The intro track, Des Épaves, is the perfect example of a straight-up folk piece that for the most part is led by acoustic guitar. Then there's the album's centerpiece which sticks out like a sore thumb (whether good or bad, you decide), Au Flambeau, which is a piano led piece, but not in the same variety many would probably anticipate after hearing that. Yes, it blows up into more of an epic closing two minutes, but it's a very odd song that, I personally found quite interesting and introspective, but others might not click with. La Disparition experiments with a couple of more dissonant guitar lines that made me think of Blut Aus Nord for a little while, which is yet another group whose early work this band could be compared to. I figure that by now, some are thinking that with all of these different ideas coming from one project which had a pretty well established sound already on it's first two full-lengths sounds as though it would be a bit of a mess as an album. But as you also might expect, since I'm bringing it up, it's perfectly manageable and cohesive. I'm all for progressive and avant-garde music, but that's never been what this project has been about, so overloading a single song with various ideas isn't what you're getting. Each track has a few ideas but doesn't make each one overflow with them.
I was actually quite shocked at how much I enjoyed this album and how current it managed to make a rather tired sub-genre sound. While it certainly isn't as game changing as I think some were hoping, it's still a damn good album, and perhaps more accessible than the new Gris album is. But yeah, it's great and definitely an album not to miss.
Overall Score: 8.5
Highlights: Brumes, Au Flambeau, La Disparition
Posted by maskofgojira at 7:53 AM