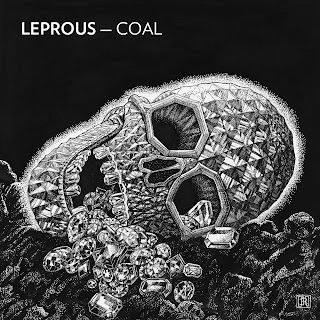 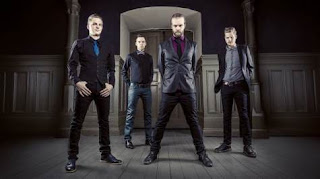 I really dig what Leprous are doing. These guys started off, for all intensive purposes, as an Opeth-esque band from what I've heard and read, but recently they've really shifted tone into something I can really dig. It seems as though working with Ihsahn has shifted the band's focus, or made them focus more or something, because their sound has really become one that I can call unique to only them.
I know that there are plenty of people out there who don't like bands that are "quirky", and that is more or less one way to earn my approval - as if that means anything at all. Bands that just make music that is interesting, unique, and fun are bands that always find a place in my heart. While I really didn't get much from 2009's Tall Poppy Syndrome, 2011's Bilateral definitely found it's place in my listening habits through it's more off-kilter sense of orchestration and vocals. This new album sees the band progressing in ways I feel like they did just to please me (as in... yeah right!). The music has actually decreased in it's heaviness, or at least metallic aggression for sure, but instead has become more dynamic and interesting. You won't find as much reliance on low-end heaviness or aggression on this record, though it is certainly still there, but more of mid-range emphasis and phrasing. I feel as though a lot of the music was written in order to emphasize the vocal talents of the band, more specifically lead vocalist/keyboarist Einar Solberg, whose voice is the perfect mix of emotional depth and over-the-top variation. Whether that's true or not, I don't know, but his vocals are definitely the spot light on here.
It's not hard to see why people have been coming out and praising this album. For how progressive and quirky these songs are, the band never veer too far out of their comfort zone and start going crazy or anything - and although I would love to hear that I have a feeling a lot of people out there wouldn't. This is a pretty modern sounding progressive metal album, but not in the djent or Dream Theater way. This is the way, I believe, progressive metal should sound. Bands taking styles and ideas and just making them work together in ways that just leave (me) scratching my head and wondering how they do what they're doing. I mean, the music and vocals on here is very theatrical, but it also has this darkness and serious tone to it at times as well which balance each other out. So, in a sense, it's very reminiscent of Devin Townsend's solo work - but obviously different.
While I would say the majority of this album is centered around the vocals, or at least that is how the first half of the album would lead one to believe, the second half does evolve into something much more "traditionally progressive". Album highlight The Valley is truly the star of the show on here, with it's soaring chorus, stop-start riffs, and buzzing synth lines, the entire thing almost sounds contradictory when I type it out, but flows together so perfectly it never ceases to amaze me. But when I actually consider what the band do on here, it's fair to say that all three of the longest tracks on here stand out. From the quirky (there's that word again) The Valley to the more steadily paced Echo and the crushing closer Contaminate Me, all three stand out on here as some of the band's best work to date. The closer in particular comes close to being the heaviest and most aggressive piece on the entire album.
So yeah, no secret that I really dug this album. Like I mentioned above, either the words "quirky" or "progressive" will turn you off, and if neither does, I hope you can find some enjoyment in this album and band because they are actually really good. I'm a weirdo who likes these things in music, and hopefully there are some weirdos out there like me so we can like this album together!
Overall Score: 9
Highlights: Coal, The Valley, Contaminate Me
Posted by maskofgojira at 2:23 PM