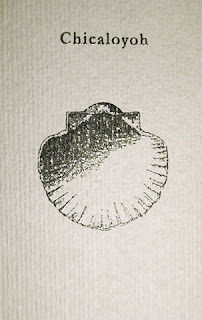 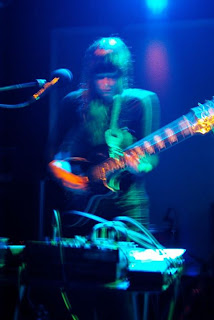 Back when I first listened to Chicaloyoh two years ago, I was still quite unfamiliar with artists who were fusing drone and folk music, though to say I'm any more familiar with it today would be quite inaccurate. But when I received a copy of this new tape I remembered the name but not the artist. It wasn't til I flipped through my Itunes library that I remembered the project.
I don't know if it's just that my ears have evolved or that this tape is more "accessible" to me, but unlike the last tape I reviewed from this project, 2011's Laissons Les Sortrir, this one proved to be a lot more immediate and grabbing with it's sounds and textures. I found each of the seven tracks on here to provide me with something unexpectedly entrancing. I hesitate to call this beautiful, because there is the dust of melancholy within these songs as well, but it just grabbed me and before I knew it the record was over. Lente Éclosion wound up being a real treat of a song, with an escalating tension moving the track forward while more and more instrumentation was brought in. Yet that melancholic beauty never dissipated, and more than any other track on here, there was a real desert vibe. It probably wasn't intentional, but the really carried the vibe of dry bones with desert sands blowing through it to me. But then contrast that with the harsher industrial tone found on the very next track Les Derniers Cris and you get some real dichotomy, and while I don't think that the gentle touch found on the former track paired right up against the harsher sound of the ladder track works the best, I can certainly respect the shifts in mood and sound. Alice Dourlen's vocals on here are quite distinct as well. They're not super weird or strange or anything like that, but the more breathy style of talk/singing she performs on here would fit, in my mind, more with folk based music, but over these more psychedelic pieces, they make it feel even more distinct and odd.
So while I don't think this is anything revolutionary or amazing, I did certainly enjoy it and I definitely respect the different tones and genres that are toyed around with on here. It's not quite as folk oriented as I remember the project being but I think that might have actually freed me up to just embrace whatever came on here. So yeah, if you like dark ambient, industrial, or psychedelic music definitely give this tape a shot.
Overall Score: 8
Highlights: Lente Éclosion, Retrouvons Les
Posted by maskofgojira at 3:12 PM