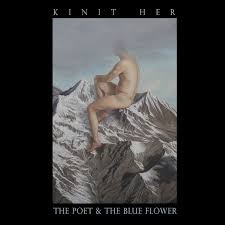 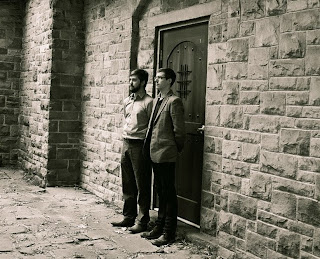 I reviewed an album by Kinit Her a couple of years back and really dug what the duo were doing. It was my first time hearing about the band and I wasn't sure what to expect, but I really enjoyed it. Since then the band has sort of experienced a bit of a surge of press from the release of one of their albums last year, Storm of Radiance, which I did not review.
After a very Kinit Her sort of introduction, this release really gets on it's way. For those who don't know, just because I didn't cover the band's last full-length as Kinit Her does not mean I dismissed the band entirely, their release project Wreathes put out a fantastic self-titled album last year that ranked in my top 50. But obviously, just because both projects come from the same sonic background doesn't mean they're the same. From what I understand, Wreathes was focused more on songwriting while Kinit Her is more about mood and experimentation through the whole neo-folk genre. Believe it or not, the duo of Nathaniel Ritter and Troy Schafer have crafted an album even more interesting than I remembered them being. The instrumentation is even more eclectic and, in a sense, off-putting than on Gratitudes (the last time I heard an entire album from the duo under this name). Even though I hear this is supposed to be more song-based than their last couple releases, as I just said, it's still pretty different. It's not the sort of Sol Invictus or Tenhi style of neofolk, that's for sure.
I don't fault Kinit Her for that obviously, their more quirky style (that's what I'll call it) reminded me alot more of Current 93 when they get bizarre. Though saying that will bring connotations I'm not sure the duo want, as they certainly are still pretty far from Current 93, there's a similar sense of weirdness and experimentation that both projects share. I would actually say that Kinit Her could potentially become the new Current 93 if they keep releasing albums at such a steady pace with as high a quality as I hear they are. But aside from all of that, this record is just fascinating to listen through, and not in the pretentious way where the song itself is second to all the instrumentation. I'll say that while none of the songs on here are anywhere as memorable as the songs on the Wreathes album, with the exception of A Dome Surrounds - which is one of the most uniquely freakish and catchy songs I've heard in quite some time, they still manage to draw you in and capture your attention. While the approach, vocally, is the same on that track as it is for the rest of the album, it's just one of those times where everything clicks together in all the right places and allows that song to work. I'd definitely say it's my favorite track from these eight songs, but, in all honesty, there isn't a bad one on here. The first half is certainly harder to get into and really latch onto in my opinion, while the second is a bit more accessible, I think if the duo intentionally made it that way, it only shows how crafty they are because I really admire that method of album structuring. If it was simply coincidence, than... it worked out in their favor.
This was one of those albums that I put on my Ipod as soon as I was sent the promo for it and I haven't stopped trying to examine and understand it since. It's just one of those records that's so interesting and engaging that you just want to put it on repeat. I've probably listened to this thing around a dozen times at this point and I still doubt I've heard everything yet. So if you're in the market for some interesting folk music, definitely check this one out, you won't regret it.
Overall Score: 8.5
Highlights: Feast of Death II, As Old As Day and Night Together, A Dome Surrounds
Posted by maskofgojira at 10:23 AM