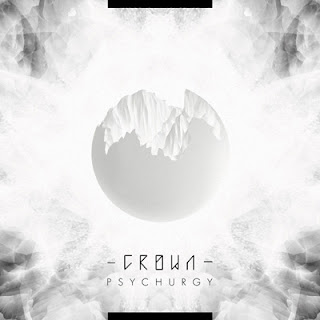 Last year I was sent two releases from this band called C R O W N but never got around to covering them. It wasn't out of not wanting to but I had other albums that I was either more interested in writing about or life got in the way. Knowing that they had this full-length coming out on Candlelight did give me that extra incentive to want to write up about this one.
I'll get the biggest thing out of the way first, this is a two man band and it certainly sounds like it. While doom and sludge bands can often make their sound work if only containing a member or two, the biggest give away was the drum programming on here. It sounds fake. I've said it many times on this blog but I'll say it again that overly compressed and digital sounding drums are one of my biggest pet peeves in music. It's just a sound that I find incredibly annoying and irritating, and while I can't say that the drums are irritating on this record, they certainly did not put this record on my good side for it's duration. Many one man/woman projects can pull off drum machines in this style of music because they don't program incredibly technical or progressive leaning drum parts and stick to minimal patterns, which these guys do, but it just sounds really plastic, especially underneath the low-end of an 8-string guitar. And really, the entire mix is sort of off as well, because the guitars are on top and rely so much on low-end that really only the snare pops through on the kit. The cymbals are pretty low in the mix and the vocals are somewhere between the kick and snare in terms of loudness, and I only believe that's due to the distortion used on them. It just sounds like the band tried to get this really heavy sounding album, but it just wound up sounding plastic and fake.
I hate to be so down on this album but it's like as I'm writing this I'm just remembering more and more things that bothered me about it. That's not to say there aren't some good things about this album though, because I think that the sound that the duo are going for could have been pretty interesting if the mix wasn't all screwed up. It sounds like they're going for a sort of doom and post-metal sound mixed with some more electronic elements thrown in as well, and that could have been cool. A track like Telepath does a good job at fusing those two aesthetics and even makes the drums work in the context of a sort of electronic kind of song; and before people start saying that's only because of the vocoder used on the track, I will say that the vocals in general aren't bad. While the harsher yells/growls sound distorted to me, the clean vocals sound genuinely good. They kind of reminded me of Paul Kuhr (November's Doom) which is not a bad comparison in my book. But even the rest of the music isn't that bad, I would have mixed it differently, but stylistically I think these guys have a good idea of where they're going sonically.
So, even though I didn't really dig much of this album, I think these guys do have potential. There's something there that will have me keeping an eye on them for what they release in the future. So you dig post-metal or doom metal with a bit of an electronic edge give this a shot and keep your eye on them as well.
Overall Score: 6.5
Highlights: Telepath, We Will Crush The Open Sky, Psychurgy
Posted by maskofgojira at 12:16 PM