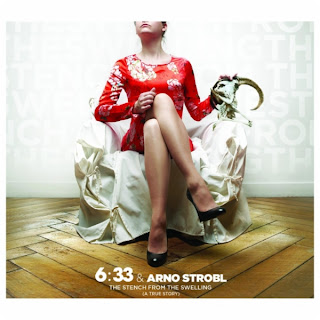 Apparently 6:33 had put out an album back in 2011, called Orphan of Good Manners, and I had never heard of it. I didn't even know about them when I first listened to this album but it looked sort of interesting and was labeled as "avant-garde" and "progressive" so my attention was piqued. It was only while listening to this album that the name Arno Strobl popped out to me.
Truthfully, when I first got this album I was not aware of 6:33 and the name Arno Strobl didn't ring any bells for me. It wasn't until listening to this that the vocals began to ring a few bells for me, I recognized the voice but couldn't place it; and it wasn't until the last song, Giggles, Garlands & Gallows II (M.i.d.g.e.t.s.), that everything fell into place and I was reminded of Carnival In Coal. When I actually looked up Arno Strobl and it said he was the vocalist for that band, it suddenly made sense to me. I always thought he was a creative and interesting vocalist based on his work in that aforementioned band, but hearing him again really brought back memories of first hearing the madness that that band expressed musically. This album isn't quite as crazy as that band was, but still manages to be quite inventive with it's genre fusions; but the result isn't based in extreme metal but feels more like a mashup of progressive metal with a couple other genres (funk, jazz, polka, electronica) with a big rush of cock rock coming through. Now, I'm no fan of cock rock, but a nice helping of it on here does make some of the hooks stick out in a big way.
I understand that even the idea of cock rock infecting their weirdo metal might turn some off, but even though it's certainly in here, it was never overblown or cocky enough to make me feel like it did anything to make the song obnoxious. It's use in a track like Burn-In or album highlight I Like It really just makes the song. It allows the choruses to just sound huge while the rest of the song can go off in a hundred and one different directions. For myself, I found it to be bloated enough to work in the context of the songs. It was never cheesy for the being retro, it felt very self-aware of how over the top it was (as all good progressive and avant-garde groups should be). I mean, there's a sense of ridiculousness to this type of music, and when bands don't take themselves too seriously, in the sense that they know their music is over the top and quirky and even absurd at times, you can tell in the music. Why is it that the title-track goes from a pretty traditional cock rock/metal song goes into a fuck metal-esque breakdown and includes a synth dominated middle section? Who knows, but it's in there and it all works for me. It actually isn't until the final two tracks (the Giggles, Garlands & Gallows suite) that things turn to a more CIC kind of sound. Though, to be fair, this is a lot more melodic than most of CIC's work, perhaps because the cock rock influence or otherwise.
This is the sort of album I'm drawn towards so I knew that I was going to like it even before I listened to it simply from the genres it was listed under, and it did not disappoint. It's great to hear Strobl doing something more substantial since his tenure in CIC ended several years back. I definitely recommend this to all those avant-garde and odd rock/metal fans out there, it's a lot of fun.
Overall Score: 8.5
Highlights: I Like It, Starlight, Giggles, Garlands & Gallows II (M.i.d.g.e.t.s.)
Posted by maskofgojira at 12:55 PM