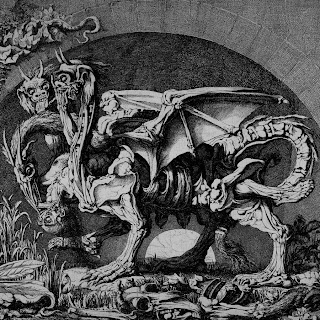 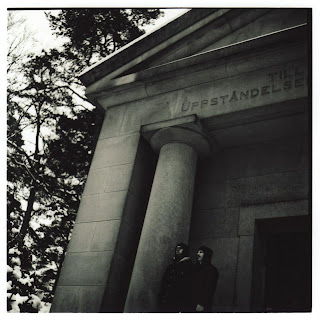 I was not aware of Head of The Demon before receiving this album one day in my inbox. I knew that I wanted to listen to it simply because I thought the cover was pretty cool, but didn't know what the band actually sounded like. When I looked them up and actually saw the genres they were linked with, I have to say that I was quite surprised by how the album differed.
Like it's listed above, this band has been described to me as a blackened doom metal band, I'm not making that up, that's what I have been informed the band was. Yet, when I actually pressed play to listen to this album, I struggled to find too much of that black metal influence beyond the vocalist occasionally screaming at me. Also, does having an extremely raw production make you black metal nowadays? If so, I get why they were called black metal, because what's on here is some pretty off-center doom metal. Off-center because the riffs go between traditional Sabbath-esque oriented ones and more "experimental" ones. I use quotes because I'm not sure what the best way to term them would be, but the band definitely try and make themselves sound more interesting by using chords that call to mind Middle Eastern and Arabian music. It's really strange. Plus, it isn't as if the band choose to make things interesting by spicing things up with the weirder riffs, to me it feels more as if they have their style, typical doom metal, and they just happened to write these riffs that were a bit strange sounding and just stuck them into songs. I say that because some songs contain them while others don't, and in the end, that wound up making the biggest difference when it came to my enjoyment of the album.
I don't have anything against a band doing straight-up doom, but this just feels so phoned in for most of it's running time it's just depressing. Raw production, sure, that's fine, but from my point of view, doom is best heard heavy, and whether that means more of a vintage tone or one that's extremely focused on low-end with more clarity put on the production, the sound of this record just doesn't work with what the band are doing. In addition to that, some of the traditional doom riffs on here are just plain uninspired. How many times have we heard someone tri-tonal riff or a ascending progression? How many times have you heard someone do a fake evil laugh for that matter? Plus most of the vocals on here are done in this dramatic sort of way, but sound strained (which might be intentional) but don't come off any more convincing than any other band attempting to rip off Candlemass (among other bands). I'm all for hero worship and individuality but most of this just did not interest me in the slightest. Harsh I know, but that's just me.
So you've probably figured out that this wasn't really my sort of album by now. Maybe you'll dig it more, I just didn't see much in here beyond a couple of riffs here and there that made me even want to return to this after my first listen. Doom fans, give it a listen if you're interested, if you don't dig doom, this is not the album to buy to help you start an interest.
Overall Score: 6
Highlights: By Titan Hand, The Man From Foreign Land
Posted by maskofgojira at 6:51 PM