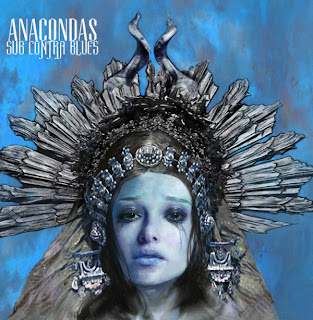 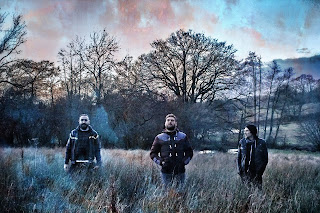 I haven't been particularly interested in a lot of metalcore since I started high school and I have to say that even then I wasn't that into the band formerly known as Johnny Truant. Granted, I never had any problems with them, but they weren't a band I ever seemed to find the right amount of time to just sit down and listen to. So it actually came as a surprise when I got an email not only telling me that the band broke up but that some of it's members had actually formed a new band called Anacondas.
From what I know about Johnny Truant, they were a pretty chaotic metalcore group who were more Misery Signals than Killswitch Engage, but that's just my assumption based off of reading reviews. This album is definitely not metalcore. I actually found it a little surprising that a metalcore band's members would "evolve" by taking their sound into one that from my perspective is actually less accessible. I mean, it just seems like an odd path to me - but what do I know. From what I can tell about this album though is that the band is definitely talented, but their sound is not fully developed as of yet. This is evident from the first two track, You Set The Moon On Fire and River, in which the band are essentially playing a mid-paced rock song. The vocals are just terribly corny sounding and very winy, sounding like they belong in some half-rate pop-punk or "post-hardcore/pop" band. To be fair though, the clean vocals used for the majority of this record are not the greatest. While the ladder track does bring up some more interesting guitar work, it doesn't really save the track from sounding bland.
It wasn't until track three, Cold Blooded, Warm Hearted, where things began to take a turn for the better. The instrumentation begins to take a turn towards actual sludge metal and more aggressive vocals begin to be introduced into various songs. While it isn't anything you haven't heard before, this trio of guys know how to write some nice sludgy songs. It took me a while to get into some of these songs because of the vocals (sometimes they grew on me, other times they didn't) but I always thought that the instrumentals were pretty solidly crafted. It seems to me like when the band aren't writing songs that are more direct and accessible they actually write better songs. The second half of this album is a vast improvement over the first. The songs are a bit more mid to slow paced and the band actually does them really well. The riffs are better, the vocals are a bit less annoying, and the overall tone feels more energized. The band also succeed when they bring in more of an ambient tone into the picture on a couple of tracks, which wind up giving them sort of a post-metal vibe which I thought was pretty cool. The album closer, This Night Will Last Forever, in particular I thought was rather well done. It's the sort of track that takes a more post-metal/sludge metal core and makes a chorus that could easily appeal to plenty of hardcore and metalcore kids.
So, despite this album starting off very badly, it does pick up and deliver some solid sludge metal tracks. I think it'll be interesting to see the reactions of fans from the band's former gig react to this album, but all I can say is that I think it's pretty good for a debut. Maybe the next release will be a bit more consistent stylistically and songwriting wise, but aside from that I think these guys could really go places.
Overall Score: 7.5
Highlights: High Horse, The Witches, This Night Will Last Forever
Posted by maskofgojira at 1:56 PM