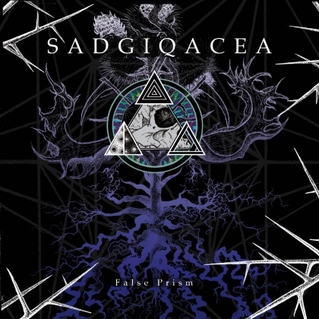 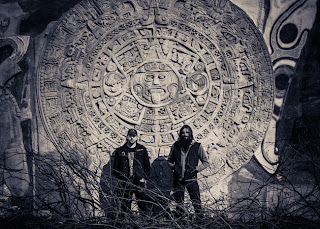 Beyond the band's association with Woe, which I learned was only in a producer/band sort of relationship rather than sharing an actual member, I was not aware of Sadgiqacea as a band before hearing this album. But knowing that there were only two members did intrigue me. Obviously there aren't too many duos in metal so I was intrigued to hear what they could do within the black and or doom metal genres.
I remember reading that the duo tracked this live because they wanted to get the feel of them actually playing together because it created a sort of mood that wouldn't be replicated if they tracked separately, and I guess I can get that. I understand why they did it and the album certainly does have more of a live sound than a lot of other records I've heard recently. The drums are definitely more naturalistic and don't have the sound of so many other records which have had drum replacement done on them. It's a lot more tinny, but if you're gonna go live, you don't even try to go for the best sound, you just go for what you can get. The guitars are a lot more crisp and clear than I imagined when I first read how this was recorded. I imagined it being much harsher, but the tone is very well crafted. I was also impressed with the way the band utilized effects through the guitar playing. I was a little shocked when the effects opened up False Segments and thought I would have to call out the band on it, but later on in the track when I got what they were doing it all snapped into place pretty quickly and it's pretty cool.
Sonically, while the duo definitely prefer to dwell inside the doomier realm, they certainly are not rid of other influences. Ideas from black metal and post-metal come through quite clearly, but, and maybe it's just me, but I think I heard some new wave influences in here as well, especially in the choices of guitar effects, but like I said, it might just be me. One of the things I admire most about this band is their choice of dynamics, whether it is through the use of just slowing things down and reducing the use of the guitar playing to leave only the drums or through the use of the guitar effects, it's well done. The former is something I was quite grabbed by and was really taken with. I just happen to think that if a band is able to quiet itself down to a single instrument in a song and keep the momentum, it's a testament to their attention to dynamics. To return to the additional influences, or ideas anyway, that appear to be coming from black and post-metal, they are at their clearest during the album's title-track, in which the band exhibit both some of their most visceral and intense moments as well as some of their most somber and clean. On the other hand you have True Darkness which is easily the most riff-based track on the entire album.
In the end I was really impressed with what these guys were doing. Both the sound they went for on here, in terms of production, and in their sound in general is something that is really impressive and attention worthy. So if you are a fan of black or doom metal and like a band with a personality and dynamics, this is one album I suggest looking into.
Overall Score: 8
Highlights: False Cross, True Darkness
Posted by maskofgojira at 5:09 PM