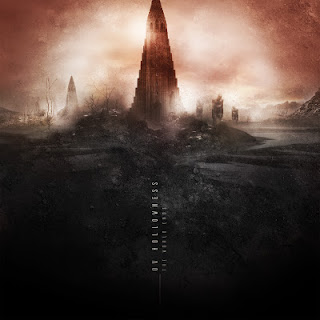 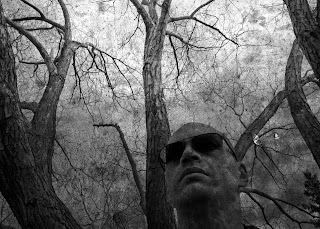 Before deciding to review this album I was not familiar with Ov Hollowness, but apparently this is the project's third album. Based in the more ambient side of black metal (from what I had read from many descriptions of their sound) I was surprised with what this album sounded like. It was not at all like what I expected it to be based on that genre tag.
Maybe it was the shot of the man in question, Mark R., when I saw the photo of him. Maybe it was the band name itself or the rather cliche album title. There were several factors which led me to think that this would be just another "standard" black metal record, atmospheric black metal record if that. They didn't really inspired much in the way of confidence in the sound that would be crafted on this album. So it came as a surprise when this album actually started to bring in traits that I didn't expect to hear, IE. clean vocals and actual riffs. Now, these are two things that aren't used consistently, especially the former, but when they show up they brought out a trait that many one-man bands and groups in this sort of style (black metal in general for the most part to be honest) tend to ignore. Now, it has to be said that while clean vocals are occasionally used, they are by no means a huge focal point of a song when they are. Yes, they may be used for a chorus, but they are surprisingly low in the mix despite that, which leads to a rather disappointing view on my part that Mark did not have faith in his vocal performance enough to stack it up higher in the mix. Granted, he's not the best singer out there, but I would have respected the willingness to actually do it more if he had done so in certain spots.
Surprisingly enough, those aspects above hit me the hardest on first listen and it wasn't until after that initial listen through that I even noticed the actual "atmospheric" parts of this album. After I heard that, it felt like there was a split in the album for me between more riff driven songs and more traditionally atmospheric black metal tracks, if that makes sense. For me, while the slick, almost industrial tinged at times, sounding production did bring an interesting character to the album, I found that the more riff-driven tracks did have the edge simply because of that reason - the riffs. The other tracks weren't bad, but rather average for the genre, nothing new. Now, obviously I don't have a problem with a band bringing nothing new to a genre if they can write good songs - something I feel like I talk about in damn near every review I write - unfortunately, this is one of those cases where I can't defend the songwriting. It's not bad, at least not to me, but for the material presented on here, it feels like Mark really could have trimmed down some of these tracks. Tracks like the opener, Abstractive, or Hollow may be good ideas, but they drag on for way too long to simply hammer their points home. This album is over seventy minutes, and frankly, for all the material that is well done on here, there is also material that either could have been trimmed or simply cut out - so my feeling was that it did not need to be that long. I'll defend the ten minute title-track because it does feature some of the best work on the entire album.
Forgive me for not being overly positive on this album, but I wish that there was more to actually compliment instead of rather average material for the most part. There are obviously traits on here that are well done, but I just can't help but think that this record could have been more. Not bad, but if you're interested in some more riffy atmospheric black metal (damn that's a mouthful to keep writing) than give this one a whirl.
Overall Score: 6.5
Highlights: Hoarfrost, Ov, The World Ends
Posted by maskofgojira at 6:21 PM