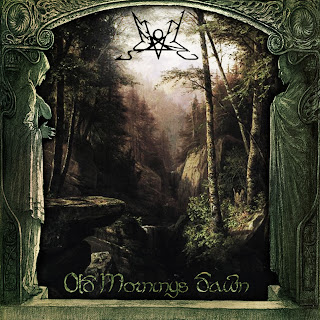 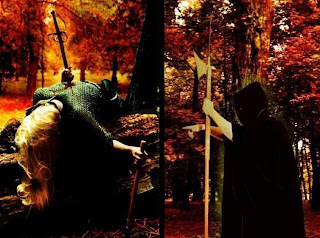 If the discussion of "atmospheric black metal" ever comes up, there are a couple of bands whose names are almost guaranteed to be mentioned. Summoning is one of those bands. Having not released any new material under this name in just over six/seven years now, of course this album was hotly anticipated.
As someone who was not the most well versed in the releases that Summoning had put out throughout their career, I'm not sure how much weight my view on this album can provide for you. I'm not sure what fans were really expecting from this album - if they wanted a return to form or a continuation on the path the duo were heading on their last few releases, but when I listen to this album it sounded exactly like how I expected it to. It really does bring to mind that whole Tolkien world with dragons and monsters and various, large scale wars (all for the sake of the ring!) that Peter Jackson showed us in his movies. It really doesn't carry with it the fierceness or darkness that band's earlier material did, instead, preferring to stay more in that realm that is somewhere between metal, ritualistic ambient, and neo-folk music. Pretty much the only things that remain from the band's black metal days are the wretched vocals and the distorted guitars, which play into the atmosphere more than provide any sort of leading instrumentation. Frankly, it sounds to me, more or less, like a continuation of what the duo did on both Let Mortal Heroes Sing Your Fame and Oath Bound. That's not so bad, really, but that isn't really my favorite sound.
To be honest, the biggest problem I have with this album is simply how cheesy it is. The sounds of falcons cawing/screaming, the bombastic synth horns, and the nature samples can prove to be just a little too much for my tastes. I don't really dig the whole symphonic metal thing because it's so cliched and cheesy, but I see it's merit in some projects. I understand the purpose of this album isn't really to be aggressive or super kvlt or anything like that but more to entrance you and bring you into this world the duo have created. Some tracks did this better than others. Personally, when the album works best (or when it worked best for me) was when it being really bombastic and over the top in it's presentation, like on the title-track, meanwhile a track that is perhaps a bit more low-key (and by that I mean it's not as bombastic), were just sort meh for me. It's weird because in the case of how over the top some of this actually is, in a lot of other bands that I've heard either in the symphonic metal world or other bands that try to achieve a more fantastical sound, I can't say that I've ever found myself particularly interested. I found tracks like The White Tower and, to a certain extent, Of Pale White Morns and Darkened Eves to just sort of reinstate ideas that more well crafted tracks did. They're not bad, just long and somewhat uninteresting. I guess where my admiration for this album lies is in the occasional influx of electronic music that comes through in several songs on here. At times this album can feel a bit too synthetic for its own good, which could have been a problem if this album didn't give the whole Tolkien atmosphere as good a go as they did.
So, in the end I guess I can only say that I did like this album, but it didn't blow me away. I pretty much got exactly what I expected to hear, some of it was better than I thought, some of it wasn't - that's just the way it goes. I guess how much you enjoy this really depends on how much you're willing to go with the fantastical vibe the duo are shooting for on here, so if you think you can, definitely give this one a shot.
Overall Score: 7.5
Highlights: Old Mornings Dawn, Caradhras, The Wandering Fire
Posted by maskofgojira at 2:37 PM