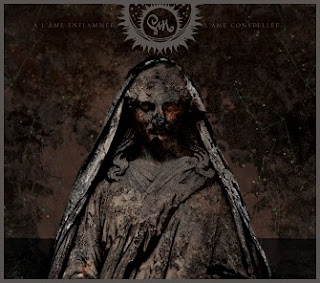 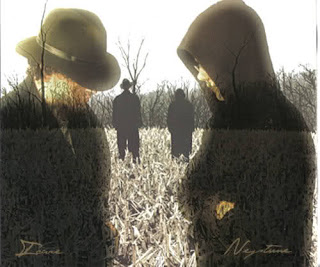 Obviously, I'm posting this review along with the one for the new Sombres Forêts album. Even though the records are obviously different from each other, them being released at the same time and the collaboration that both bands did with Miserere Luminis a few years back, they will be linked. Of the two though, I would say I've heard more about this one, in terms of lead-up press anyway.
Perhaps even more than Sombres Forêts, Gris was associated with the depressive black metal movement several years back. With the extremely distorted guitars, howled vocals, and general mood of overwhelming melancholy, it's not totally unreasonable to see why Gris was lumped in with all those (mediocre) groups like Happy Days and Life Is Pain and other groups of the sort. I honestly hadn't listened to the band in years and I went back a listened through a couple of tracks before reviewing this album and was actually surprised at how much Il Était Une Forêt... differed from what I remembered it quite substantially. The use of acoustic guitars and piano throughout the record really added to that more oppressive mood that they had on that album and were far better utilized than other depressive groups had chosen to use them. For this new album, the duo has definitely stepped up their game though, in pretty much all aspects of their sound, from production to the sound in general.
Production wise, it's definitely several notches above their last full-length. I can't accuse that previous record of being bad musically, but it suffered from guitars that were overdriven with distortion and it suffocated the life out of some parts of the album, which may have been intentional. On here, you have a much more leveled production and a mix that really allows small little tricks to work even better than one might think. There's an instance on Les Forges, the second track, where the song breaks down to acoustic guitar before building back up again. During that build up you have acoustic and electric guitars working in the same section as well as piano and violin (and what I think may have been a pan flute as well). In the hands of the wrong producer and mixer, this could have come out sounding terrible, but through the use of panning and leveling, it's probably one of my favorite sequences on this entire album. The presence of bass in the mix is also something I rather enjoyed as well, as those who come to this blog enough will know, I do tend to favor albums that utilize bass over those that don't.
Stylistically, this is also a step up from their last album in the sense of how "progressive" one could say it is. I mean to use it lightly in this case because it's still very much in line with what the band was doing on their last album, except everything has been increased and turned up or made better. In the traditional of "progressive" albums, this is a long record, it's just over 80s minutes in total, which is why it was split up on two albums (double album). It works, if I had a gripe with this album it's that it's a lot to take in in a single sitting. The layout of the album is something worthy of praise though, while not original, it does work better than I expected it to upon first listen. Both albums are laid out in pretty much the same way, the first and last tracks of both discs are acoustic pieces with a short acoustic interlude as the third track on both. The other four tracks are lengthy "progressive" black metal songs that are among some of the best songs I've heard all year.
As you can probably guess, this is a great album. Definitely an album that surpassed any expectations I might have put on it before pressing play. Even on my first listen I wasn't crazy about it, I liked it, but was not intending to give it the score I now rate it with. Hopefully if you dig good black metal you'll listen to this and save yourself the humiliation of saying you haven't heard it yet.
Overall Score: 9
Highlights: Les Forges, Igneus, Une Épitaphe De Suie
Posted by maskofgojira at 1:49 PM