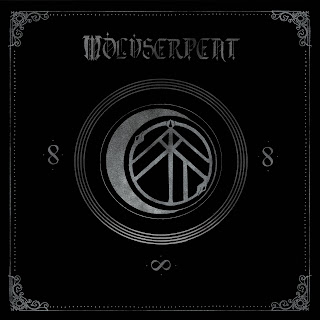 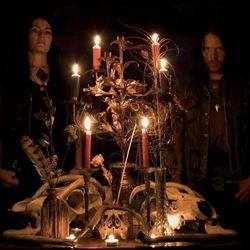 I was first exposed to the duo known as Wolvserpent through my good friends over at The Inarguable several years ago when I first started listening to what they told me to. Since then I've become rather taken with Blake Green's solo project Aelter and decided to give his "main" band a chance. Obviously I was impressed and was excited to hear what they'd do for their Relapse Records debut.
As my good friend Jon said when I first told him I was listening to this record, "Blood Seed was a great example of their ability to create these big, sprawling textures with the occasional really heavy riff, and I really dug it, but this new one is a lot more mature and varied - heavy riffs WITH sprawling textures." I'm inclined to believe him, as he is far more familiar with the band than I am, but it's obvious by the time you're two minutes into Within The Light of Fire that this is the case. As always, the band's sound takes stock from more of the black metal and doom metal realms with plenty of dark ambient, drone, soundscape, and by their own admission classical, aesthetics and composition styles thrown in as well. But this isn't anything new for the band if you've listened to any of their previous work before this album, they've maintained the balance throughout their career, it's just more palpable here. In a sense it's more accessible. The riffs are in your face while the ambiance is wide and cinematic, in a sense, and allowing the two to exist within this scope is definitely a more defining feature of this album than on previous.
Though to say this album can be defined by a single sound would be incorrect. Aside from the opener, Threshold:Gateway, which is more or less a typical intro track, the rest of the album pulls from a similar pool of influences but makes them into very different pieces. A track like the previously mentioned Within The Light of Fire takes on the most metallic tone of the four pieces on here, and it was probably a wise choice to put that one right up front. As Wolvserpent aren't your typical metal group, I'm sure plenty people who listen to whatever Relapse releases might be a little cautious at first listen. But the next three songs take on a different tone, with In Mirrors of Water taking on the most "post-metal/rock" tone of any track on here, leading from minimal beginnings to an absolutely massive final act. A Breath In The Shade of Time takes on a more meditative and somewhat ritualistic tone with a perhaps more clearly defined "classical" tone. Though I have to say this track is also the closest to drone on here; and during a particular segment in it's middle, recalls some of the recent work of drone metal favorites Sunn 0))). Closer Concealed Among The Roots and Soil returns to a more metal oriented style, though I would say it's arguably more tense than Within The Light of Fire. The entire song feels more aggressive and, in a word, angrier - or at least it did to me. It's an excellent way to close out the album as it moves from the most aggressive piece on the album into straight ambiance.
Overall it's a pretty solid, if not a bit too long for my taste, album that really gives you a nice view of what this band can accomplish while making it slightly more accessible for a more mainstream metal audience. The riffs are bigger, the atmospheres are bigger, and the song structures have not gotten shorter, so in a way they haven't compromised what they were doing before they signed to Relapse. If you're a fan of doom metal or records with extended song lengths, definitely go out and give this record a shot because if you enjoy either of those things (among others) you will have a blast listening to this.
Overall Score: 8.5
Highlights: In Mirrors of Water, Concealed Among The Roots and Soil
Posted by maskofgojira at 6:41 PM