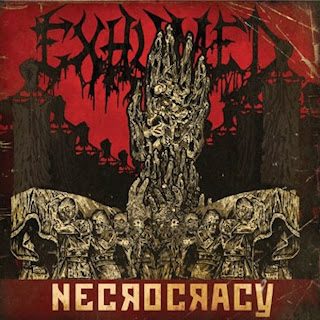 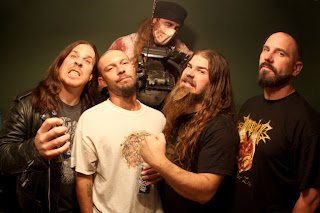 As I believe I said in my review for the band's 2011 album, All Guts, No Glory, I have an instant attraction to any band that is able to pull off a Carcass-esque sound and Exhumed was at the top of the list. I really enjoyed that album, which was my first encounter with a full album from the band, and it lead me to anticipate this album. I refused to listen to any tracks released before I could hear the whole thing because I wanted the whole thing to sound fresh to me, as their last album did.
There is not a single second wasted on this album, much like the last record the band put out, that doesn't just ooze aggression and talented songwriting. Each of these nine songs is just death metal at it's finest in terms of songwriting. I've said it many times, in my review for the aforementioned previous album as well as during several other albums as well, but the Carcass vocal styles on here (guttural growls and more raspy screams) is a style that has worked for me in the past and continues to be a dynamic that I love. But aside from that, I'd say that the band has pursued a bit of more a technical direction, instrumentally, on this record than the more straightforward and at times very melodic sound on All Guts, No Glory, with the main example being the likes of (So Passes) The Glory of Death, which is easily one of the best songs on the album in my opinion. Though that isn't to say that this album is without a fare share of melodic guitar lines and harmonies, but it's significantly less than before. The song structures are a bit more schizophrenic sounding, with a track like The Shape of Death to Come jumping between a pretty melodic and thrashy verse riff and a slower, but almost more grinding chorus one. This is not the only instance of a song jumping around though, as several songs jump between sections, even if the tempo or style may change all that significantly, it feels less cohesive, in a sense, and more like scattered, which certainly isn't a problem in regards to this album.
On my first listen though this album, while a majority of the songs did hit me in a great way that made me think this would match the band's last full-length, there were actually a couple of tracks that left me cold. Over time I have grown more warmly towards those songs, but even still they don't quite match up to some of the clear highlights on here. Not every track has to be a barnburner mind you, but some tracks, for example the brutish Sickened just didn't stay with me as much as either the title-track did or Ravening later on. That's nothing against the track(s), with the aforementioned track perhaps showcasing some of the most intense sections on the entire record, it just felt relatively similar to some pieces I've heard the band do before. I think it's merely a matter that I've grown used to the band's sound more and that several pieces feel much more similar to others, and those proved to be the ones I was less drawn to, but the pieces that either hit me with something new or just kick me in the gut with a strong hook, I'm all the willing to sing praises for. But it's like I continue to say, you don't need to reinvent the wheel on each record, if you can write good songs and make it sound like you are having an ounce of fun performing them, I'll be there to listen. Exhumed, you have had my attention, and with this you continue to keep my ears tuned in.
Regardless of certain songs hitting me harder than others, this is still a kickass record that has everything I look forward to from the genre. If you've heard any of the band's previous work, you know what you're in for, and hopefully, that excites you (because it does me). Fans of death metal need to check this record out, because it is surely one of the most fun and catchy to come out this year.
Overall Score: 8
Highlights: Necrocracy, (So Passes) The Glory of Death, Carrion Call
Posted by maskofgojira at 8:29 AM