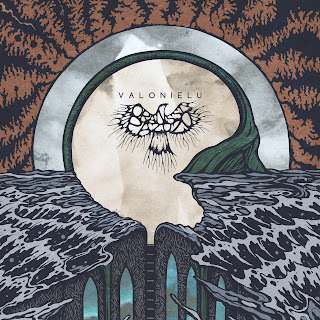 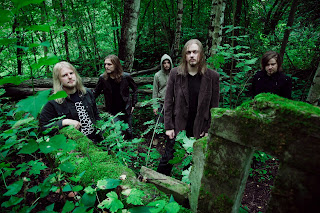 Ever since I heard the debut full-length from Oranssi Pazuzu back in 2009 I've been in love with what they were doing. Coming from, as far as I know, more of a psych-rock background than a black metal one that wound up resulting in a very original and unique sound. Since then they've continued to impress with further releases and this new album is no exception.
From the beginning, Oranssi Pazuzu have always been stranger than the average black metal band. Forming from the ashes of psych-rock band Kuolleet Intiaanit, this group has always felt like one of the groups who was closest to bridging the gap between psychedelic music and black metal. Because of the background some of the member came from, the resulting early work was exactly as one would expect from the fusion of those idea. It was on 2011's Kosmonument where they began to actually test the boundaries of those sounds a bit more, with tracks that oozed pure psychedelia while others featured a slightly stronger black metal edge (if only slightly) and contained some of the group's most accomplished work to date. So it was a little strange when I saw the track listing (and time lengths) for this album and it appeared as if the band had stripped back some of that more "progressive" edge, because only two songs were actually long compared to an album of extended tracks; but I couldn't have been more wrong. While the songs are certainly a shorter and more compact, if anything, the band has come up with some of their most consistent and memorable material yet while still exploring new territory.
It shouldn't come as any shock at this point since everyone was saying it when the first track had dropped from this album, but the band has embraced a far stronger new wave and post-punk influence on this record. On the shorter tracks, the band really jams out a groove that comes straight out of the 80s, and I mean that as a compliment. Unlike a lot of bands, Oranssi Pazuzu has always had an appreciation for what the bass guitar can add to a band, and on each of their recordings you can heard how they utilize it to only make them sound all the more interesting. When they're being metal, the bass only helps to thicken their heaviness, listen to the opening of Uraanisula, and when they want to get all weird and psychedelic, the bass keeps the foundation while the guitars go all trippy. But on here, with that bigger 80s influence, the bass provides a majority of the hooks. The one-two punch of the opening pair, Vino Verso and Tyhjä Tempelli, contains some of the catchiest basslines I've heard in a long time. The other standout for me was the synth work on here. Maybe I just didn't notice it as much in the past, but quite a bit of the synths used on here are place further in the front than I can recall being the case from previous material. There's less of the background atmospheric backdrops that were used in the past (though they are still used on here), the presence of more "electronic" work being done. It feels closer to what you'd hear in a new wave band honestly.
I figured, regardless of if the band had reduced their psychedelic ideas or not, that I would enjoy this album, and luckily the band is at their peak at this moment and I dig this even more than I thought. It's definitely another highlight for this year and another notch on the wall of this band's continuing progress and evolution. If you haven't checked this band out yet (and why haven't you!?), then get your ass in gear and do it now.
Overall Score: 9
Highlights: Vino Verso, Ympyrä On Viiva Tomussa
Posted by maskofgojira at 1:10 PM