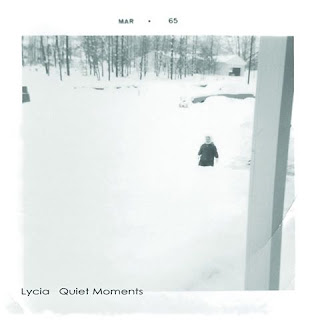 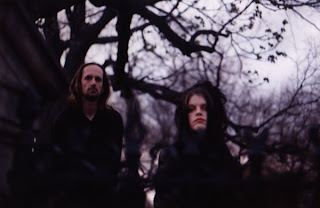 Frankly, I'm not sure I'm the right audience for this sort of release, but friends of mine have given this thing much praise so I did want to give it a listen. Despite the record, Cold, which was released back in 1996, being considered a modern day classic, I had never heard of it until it was re-released earlier this year by Handmade Birds. I'm not in touch with the whole darkwave scene so I was more or less in the dark about the whole thing, but hey, why not give this one a shot and see what all the fuss was about.
To be honest, although I don't listen to a whole lot of darkwave music, I do have a couple of albums that do come from that genre so I had a slight idea of what the genre was and perhaps where this group was coming from. The early records from Dead Can Dance or Clan of Xymox for example, are more or less what I'm familiar with. Based on the cover I certainly didn't come into this expecting more of the upbeat nature (close to post-punk) nature of the early records from the aforementioned bands but this turned out to be something very different than even what I thought. I have gone back and listened to a couple of tracks from the band's album and while enjoyable to a certain extent, don't touch the same area this album does. Where that album felt, if I may make this metaphor, like a young group who were despondent and depressed, this one feels like the logical succession from that sound, it's much more brutal in its depiction of sadness and melancholy with very few lights being let inside. It's a stupid pun but I'll make it anyway, this is a cold record. It feels cold and stark, but delicate and at times very beautiful.
With that all being said, coming from the whole dreamy nature of the record, one should also know that this is an album that takes its time. The songs on here are very simplistic with repetition providing a large part of each song's running time, but the idea is more about engulfing sadness, melancholy, depression, or whatever dark emotion you feel like digging into. A track like Greenland is perfect in this way. It's so minimal in its writing that at times it feels as if the entire album may just lull you to sleep with how soft it presents itself. Now, at least in my opinion, that works as both a plus and a negative when it comes to this album. While individual tracks being that way in construction is fine, personally, at times things did feel a bit samey to me in places. The whole dreary and dreamy tone is all fine and good, but to me it sort of wears down on the listener (me in this case) after a while. Now, maybe it's just a time thing because I felt this more whenever I listened to the album earlier in the day as opposed to at night. Also, after about the first four tracks, it sort of felt like there was a bit of a lull where the songwriting sort of took a bit of a dip before coming back up at Spring Trees. Neither of the two tracks in between track four and track seven were bad mind you, I just felt like they weren't up to the same caliber as the first four tracks or what came after them.
The last three tracks on the album (making up what I would refer to as the "dead trilogy" on here) are definitely the most experimental sounding of any of the songs on here. While all the same principal elements from the previous eight tracks are still there, the tone is by far the bleakest. Honestly, these three tracks make up some of the most thoroughly depressing songs I've heard in a long time. Ideas seem to come in from more of a IDM, industrial, and harsh noise area, at least to me, and really make these last handful of tracks feel all the more chaotic and dissonant in comparison to what had come before it.
Overall, I enjoyed this album, I'm not sure I would say it was an enjoyable experience since by the end of it I was usually left feeling literally depressed and I didn't want to talk or see anybody, but the music itself is very well done. Perhaps it's not as poppy as I would have expected it to be (based on the little I had heard from the genre - obviously) but the melancholia definitely makes up for it and more. So if you're in the mood for being depressed or just like really sad music, do yourself a favor and check this one out.
Overall Score: 8.5
Highlights: Quiet Moments, Spring Trees, Dead Leaves Fall
Posted by maskofgojira at 8:22 AM