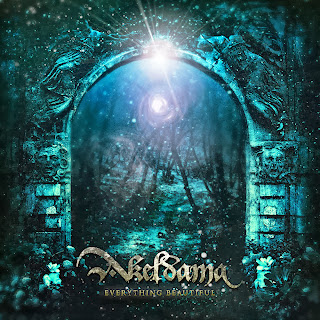 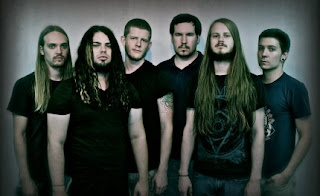 Akeldama is group who have been coming up within the whole djent scene within the last couple years thanks to a pretty well received demo. This album has been talked about for what seems like quite a while and it almost seems strange that it's come out now. I have to say I was interested in what this was going to turn out to be even though I wasn't a big fan of that initial demo.
Let's be clear about this, Akeldama is a djent band. There's no getting around that fact when listening to this album, while groups like Periphery or The Safety Fire include just as much progressive riffing (in the sense that their style relies just as much on melody and riffing as groove), what's used throughout the majority of this album is pure djent. There's almost no deviation from the low-end crunch or palm mute, which immediately proved to be a bit of a problem for me. When it comes to the guitar work, there isn't a whole lot on here that you haven't heard before, and it sucks to have to say this but a lot of it is just generic. That isn't to say anything on their songwriting as much as just the nature of the guitar work and riffing style found on this album. I also had a problem that the bass was almost non-existent for the majority of the album, which I know won't be a problem for some, but it was for me. I like to hear bass in a band's sound, and save a few spots where the guitars either weren't being played, one could wonder if the band even had a bass player, especially with all the low-end used on here. Most melody done on here, that comes from outside of the vocalists, is all synth based, which definitely does give the album a bit more of a modern, melo-death tone to it, but frankly, I would rather hear a guitarist provide a melody instead of relying on the background synth to, but again, that's just me.
As for the songwriting and vocal aspects of the band, that is a somewhat different matter. Despite my problems with the low bass and the lackluster guitar work, I will give credit to where credit is due. Both Connor Reibling and Andrew Zink have strong presences on here through their vocal work. While I'm not in love with every song, both of them have styles that differ enough from each other to make it so they're not easily confused when they're going back and forth. While Zink does handle the clean vocals, of which I'm not a huge fan of but isn't a huge stumbling block when listening to this album for me, his more aggressive vocals definitely make for nice interplay when he uses them, hear Into Infernus. His tone reminded me of an early Coheed & Cambria style vocal, where it was really high and nasally sounding. I dislike that band and when I first heard Zink's clean vocals on the band's demo I was very unsure if I would even give this album a listen, but they did grow on me - if only slightly. The songwriting is also a strong point on here as well. Putting together songs that are interesting, even with lackluster instrumentals, is good and the two vocalists do know how to weave a line that sticks with the listener (me in this case). Several songs on here had nice hooks that proved to be staying even long after the album had concluded. Tracks like Apotheosis and A Glimpse of Perfection were particular highlights on here with possibly some of the strongest vocal melodies I've heard all year - the latter even has audible bass lines.
While I wasn't overly enthralled by the instrumentation on here, when it came to the vocals and songwriting I did feel like the band did have a nice grasp on things. It's solid and if nothing else good for a listen or two. I don't think it has the staying power of records from the likes of Uneven Structure, Vildhjarta, or Periphery (to name a few) but it is what it is. If you're a fan of the genre, give it a listen.
Overall Score: 7
Highlights: Apotheosis, Shadow of An Entity, A Glimpse of Perfection
Posted by maskofgojira at 3:17 PM