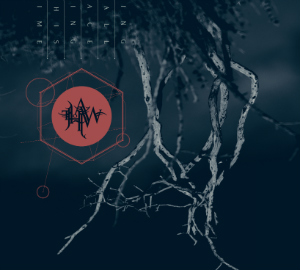 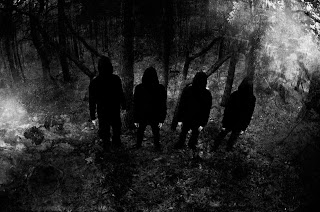 I've known about Thaw for something like a year now and first discovered them on Bandcamp. I remember finding their last demo, Advance, and thinking that it was actually pretty solid. I was going to cover that but never actually got around to it so when I was sent this album I was quite interested in it.
Listening back to that demo, it's somewhat curious how much the band have upped their more experimental tendencies for this debut album. While the demo certainly had it's fair share of industrial and noisy elements, it was primarily a black metal record, at least to me. This new record really just amps up all that noise and harsh industrial tones though, so much that opener The Gate is entirely populated with such ideas. I mean, it is an intro, so that is to be expected, but it's not as though all those ideas are just abandoned as soon as track two begins. There's a harshness to the tones used on here, not so much in regards to the instruments themselves but to the various synths and additional effects used. The actual production itself is pretty clean sounding, with each instrument clearly having its own place in the mix. There isn't a huge amount of distortion on either the guitars or the bass, which does add a level of clarity to the playing that I think might have been obscured if they had gone for a full-on noisy, industrial black metal sound. I actually thought that the use of more low-end benefitted several of these songs because it isn't just the traditional tremolo picked guitars, though that's still here, listen to Hunted Pray if that's what you crave, and at times the band sound closer to post-metal than black metal but that's sort of adds to the appeal in my opinion.
Beyond all of that however there are some seriously interesting songs on here that call to mind a bit of Deathspell Omega and Blut Aus Nord, but not in the way you're thinking of when I reference those names. Usually when I bring up these bands, it's usually to describe bands who make use of a lot of dissonant riffs and more chaotic sounding structures, but this record actually keeps things a lot more "melodic" in comparison to what those bands usually do anyway. I bring them up because there's an overarching industrial tone (as I mentioned above) which at times did make me think of BAN, though to be fair it's a very different sort of industrial sound, and the DSO reference comes from the more melodic parts which for which I do believe there is some comparison. Obviously this is all my opinion and I found these references somewhat interesting because they're not thrown in your face as many other bands do but well groomed influences that clearly have had an effect on this band's sound. A track like Kiara is an interesting showcase of these influences (among others, obviously) because it's a very psychedelic, moody track that shows a bit more of these experimental tendencies. The majority of the track is a repetitive guitar line and drum part but there's a middle section where the drums just go off in a way I certainly did not anticipate. Maybe I'm the only one hearing these influences but I thought it was pretty cool.
In the end I really enjoyed this album and thought it showcased a pretty cool and unique sound that I haven't really heard performed this way before. Make not mistake, it's not game changing, but it's interesting and it's a sound I'm interested to hear what the band do with in the future. Hopefully you'll give it a shot if you're interested in the more experimental side of the genre.
Overall Score: 8.5
Highlights: Divine Light, On The World's Grave, Under The Slag Heap
Posted by maskofgojira at 5:52 AM