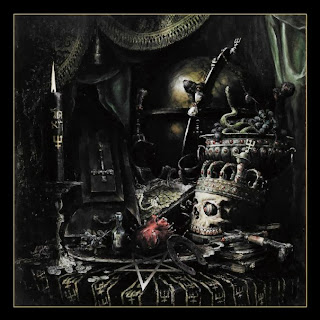 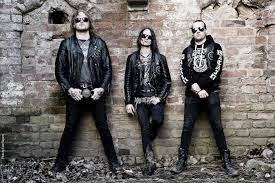 Watain is a band that's no stranger to controversy, whether from their sound to their on stage antics, they draw attention. There's so much hype surrounding Watain for one reason or another but speaking for myself, it's always been about the music. Regardless of anything else I wanted to cover this album to hear how the band evolved from their last outing.
First off, I just want to say how hilarious a lot of the reviews I've seen for this album have been. While there's been plenty of middle ground the amount of people giving this high scores and low scores have provided me with some of the most hilarious writings I've read all year (in terms of reviews). Yes, Watain have evolved from a pretty traditional sounding black metal band into a much more melodic and, at times, progressive sounding black metal band, but by doing that the amount of people complaining is about as equal to the amount of people who just love this album. I read one review where it called this album Watain's Blackwater Park while another claimed it was their St. Anger, it's just funny is all. People don't like it when their bands evolve it seems, I mean, they claim to want a band to evolve, they just don't want them to actually change - just write different songs. Or at least that's the way it looks from a majority of those negative reviews and comments towards this album.
I mean, to be honest, I'm not the biggest fan of Watain but every time they put out an album I feel the need to listen to it. I enjoy their albums, but I wouldn't say they're my absolute favorites with the exception of 2007's Sworn to The Dark, which I genuinely do think is one of the best crossover extreme metal albums to come out in the last twenty years or so. What I think the band has going for them besides their stage show is that they do know how to write catchy riffs and construct some solid songs. They've proven that since their first release that they could grab a listener through the power of strong riffs. That's something that's still true on here. Maybe I'm ignorant on this but I can't really say this album is any less "kvlt" sounding than 2010's Lawless Darkness album was. Yes, there are certainly aspects that have almost nothing to do with the whole aesthetic the band has built up themselves, and maybe it's the fans fault for thinking that confines them to simply being another Dark Funeral-esque band (in the sense that there can be nothing beyond blast-beats and tremolo picking and snarled vocals).
In my mind, as if that means anything at all, it's the times when the band branches out, whether successfully or not, that makes me respect them all the more. Even if I wind up disliking an entire album at least they tried something new (though I will say if a band attempts to copy another band's sound, I have less sympathy towards that). But tracks like the uber melodic The Child Must Die or the title-track as well as the unexpected power ballad that is They Rode On only makes me think that Watain want to try something new. Hell, how can I not respect the out-of-character avant-garde touches on closer Holocaust Dawn. Even if they're not my favorite tracks from this album, I still think that they have something to offer. Now, if I'm being honest, no, I don't think this album is as consistent as the previous two full-lengths were, only a handful of tracks actually stick with me while the rest are just sort of on when I decide to play the album.
It's a decent enough album with some great tracks, but as a whole I don't think it's up there with, as I said, either of their previous two full-lengths. I love reading reviews and comments of what people think of this one simply because those that are on the ends of the spectrum are just so entertaining with their reviews and while mine may not be as entertaining as those, I figured at least I could weigh in with, perhaps, a less biased review. Check it out if you're a fan otherwise I don't really think it's a necessity.
Overall Score: 7
Highlights: All That May Bleed, The Wild Hunt, Holocaust Dawn
Posted by maskofgojira at 7:39 PM