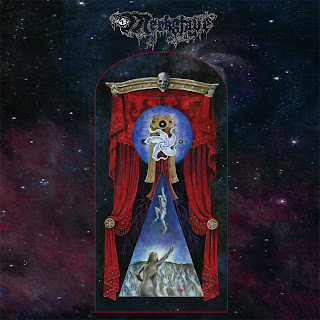 Despite my first time actually having listened to Merkstave, this isn't the first time I've heard of them. I first heard their name about a year or so back when some friends of mine brought them up, though it took me this long to actually listen to them. From what it looks like (on various sites) this record, the band's debut full-length, is also their last album, which is a shame.
I realize this is just pointing out the obvious, but at the point of me writing this review, this is probably the best funeral doom record I've heard in quite a while - and there have been quite a few releases from bands I like this year in this genre. With only three tracks, and an album that is under fifty minutes total, Merkstave have managed to craft a funeral doom record that is both true to it's roots but is also much less monotonous and dull than the majority of their contemporaries. As a fan of funeral doom, I can put up with long songs and records, but sometimes there's just a point where it gets to be too much. Double albums where most of the songs top fifteen minutes and you're essentially listening to a band playing the same progression at a slightly different speed on each song gets to be quite boring after a while. On each of the three tracks on here, the band manage to not only change the tempo from droning to blasting, in the case of the opener, Lament For Lost Gods I, but also show a sense of variety. Black metal mixed with funeral doom has been done before, but from the majority of albums (note - not all of them) I've heard that have been called "blackened funeral doom", very few actually break away from just the vocal style and extremely atmospheric tone of black metal. While I wouldn't go so far as to say this band has a lot of black metal, it is in there. But for that matter I wouldn't say this has a bit of post-rock in it either, but there are climaxes which definitely rival those of any post-rock group - just don't assume it's the same sound of those groups though.
Granted, maybe I'm just thick because the fact that all three of these songs have already been released (on two previous demos) and I just haven't heard those yet. Maybe I'm blowing this out of proportion because I haven't heard the rawer demo versions of these tracks and the cleaner tone on here might not compare to those. But that's neither here nor there because in the end all that matters is the music on here. Those who have heard the original demo versions should feel free to tell me if this does improve on them at all, but what's on here is great. It's clean, but not polished, production wise, with a nice balance of tones that don't overwhelm each other. In addition to that the melodies used, particularly on Spawn of A Lower Star, are extremely well done. I haven't heard a funeral doom record as well crafted, melodically as this one in quite a while. I mean, this band doesn't have a keyboard player, though piano does close the record, so they're channeling melancholy straight through their guitar melodies. I've said it in reviews for melo-death albums, but it seems appropriate in this instance as well, when so many bands are reliant on keyboards and synth to provide the melody of a song, it's refreshing to hear a band just use guitar melodies so well.
If this record featured only one of the qualities I mentioned above it would be solid, but the fact that sonically it is varied, the entire album isn't that long, and the sound of it isn't massively heavy (focused on low-end) or brutally simplistic (no depth) just makes it stand out that much more in my eyes. If you're not a fan of the genre I would say to at least give this one a chance because it is pretty easy to just slip into without getting bored. Don't be shocked if you start hearing this is one of the best doom records to come out this year - because it really is.
Overall Score: 9
Highlights: Lament For Lost Gods I
Posted by maskofgojira at 7:09 AM