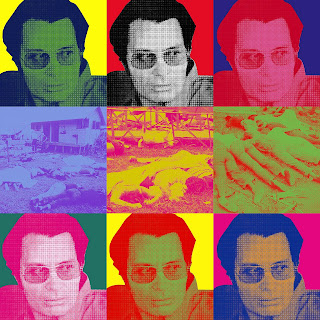 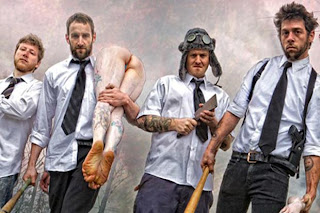 As many(?) probably know, I'm a huge Mike Patton fan and of his various projects. It should come as no surprise then that I also have a soft spot for experimental and avant-garde based metal groups like Polkadot Cadaver. Though in my mind they haven't been quite as unique as some of the member's previous group Dog Fashion Disco, I always try to make a point to listen to their stuff.
I know it isn't exactly the nicest of things to start a review off with but in my mind, while Dog Fashion Disco was a pretty solid and interesting band that wanted to be Mr. Bungle, Polkadot Cadaver is trying to be Mr. Bungle and not doing it as well as DFD. There's no doubt in my mind that the men writing this music are talented and skilled at writing in various styles, but where their previous band managed to take the Mr. Bungle and Faith No More approach to being stylistically diverse, Polkadot Cadaver just settles for being sort of quirky and fun. Not a problem, but I just needed to state my case before progressing. Since I started negative I'll continue on with it before getting into the positive. While the last point was simply my view on how I see this band, in regards to this album, I feel like some of these songs are just rather lazily written. Maybe it's just me, but I felt like I could write songs with better hooks than those on Phantasmagoria or Sheer Madness. They're not bad songs, but I found the hooks to be really dumb and lazy sounding in comparison to some of the better moments on this album. When this band hits a good hook they can make it soar, but for the most part they're either ok or really lame.
For the good parts, I still think that Todd Smith has a great voice and varied range which allows him to come across as fresh and interesting on all of these songs, even if the melodies he's singing are rather lame. Musically, the band are in a similar boat. Though the band have decided to take a more aggressive and metallic approach than DFD, they use electronica to their advantage to spice up some otherwise typical metal tracks and make appropriate applications of jazz and funk influences on certain tracks as well. While I do think that the band rely a bit too much on the electronic effects on some tracks to the extent that it could come across as an entirely electronic group with a vocalist, they do benefit from having a schizophrenic nature to their songwriting where it doesn't become a huge problem. This perhaps isn't as spastic or varied as a lot of other bands who are tagged as "avant-garde" but it is certainly one of the more accessible to the average metal fan. The entire record maintains a pretty metallic level of aggression throughout which makes it pretty easy to get a handle on, it almost never gets too abstract sounding, though it can certainly still get quite quirky. Plus, where else are you going to hear Neil Fallon go bat-shit crazy on a metal song as he does on Transistors of Mercy? He would pretty much steal the show on here if it wasn't for some earlier highlights like the ones listed below.
Overall, this turned out to be a pretty solid album, though not quite as spectacular as I would have liked it to have been. There's some really catchy songs on here, but also a few that are annoying and just plain bad - just skip over those. But if you're looking for a metal band that is quirky but still aggressive enough to get your attention give this album a whirl. If you're more of an experimental fan, you probably already know this band and so you've probably already heard it.
Overall Score: 8
Highlights: Touch You Like Caligula, Impure Thoughts, Transistors of Mercy
Posted by maskofgojira at 7:13 PM