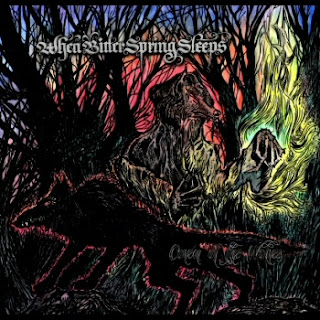 When Bitter Spring Sleeps have had quite a bit of mystery surrounding themselves since they first started releasing music. Since their inception they've only released a demo and split (with the always amazing Panopticon) so material has been relatively slim from them. It was only recently that I saw this album posted on Facebook that I even remembered the band and realized that it was worth looking into.
I think that the first thing that has to be said about this full-length is that the production value of this thing has drastically improved upon the sound of the split with Panopticon. While the band may have been in control of their sound and knew how to write on that split, the songs were buried underneath ambiance, field recordings and vocals so it sounded quite unrefined at the time. The songs were ok but the production ruined them. This new album definitely has a higher quality to it, and the instruments (for the most part) come out and shine. Granted, the whole thing is still pretty rough, with distortion just eating away at the guitars and the drums still being quite muddy in the background, but more things come out and demonstrate just how well the band are adept at their craft. The first thing that hit me was definitely the melodies. Whether it's a guitar or a vocal melody, the band shows that they are highly skilled at creating lines that stick with you long after the song or album has finished. Usually channelling a more morose and melancholic tone than might be anticipated, or at least I anticipated.
But I guess the thing that proved to be the most surprising about this album is how diverse it was. Yes, this band is based in black metal, but plenty of folk and alt. country influences come through on various tracks as well, but those weren't the surprising elements. Plenty of bands fuse those elements in various ways, to varying degrees of success, but it was the more traditional heavy metal ideas that came through on a song like the title-track that grabbed me from the first listen. Musically, this refers to more simplistic, but actually very well done and quite catchy riffs being intercut with more traditional black metal parts. Vocally though, that's perhaps where this album impresses the most. The majority of vocals are done in this sort of bellowing croon that is just so unexpected, but in a great way, that it really makes the album. I won't lie, there were a couple of spots, listen to the end of The Sky Has Not Always Been This Way, that are a bit cheesy sounding. I also thought that the use of field recordings did overstay their welcome on here as well. I didn't really need an entire track dedicated to it either, I don't have a problem if they're used sparingly, but I just felt like they took up too much time on this album and didn't really add too much to the vibe of it either.
Overall, this was quite the little gem in the rough that I didn't expect to grab me as strongly as it did. I haven't really heard another band fuse genres like these together like this before, so hopefully that's an endorsement that will turn you on to check this album out. It's not going to be for everyone, some of the traditional heavy metal aspects may throw some who want more of a usual black metal style, but for those interested in something a little different, this is well worth your time.
Overall Score: 7.5
Highlights: Coven of Wolves, The Sky Has Not Always Been This Way,
Posted by maskofgojira at 11:33 AM