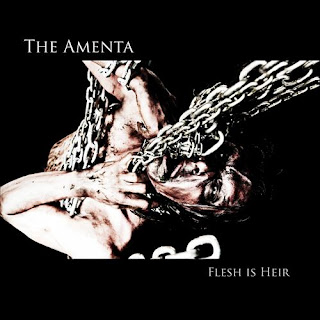 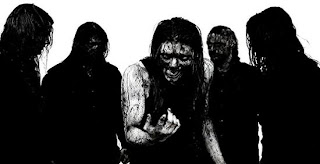 The Amenta is a group who I have been following for quite some time now. Ever since their first album their sound has been one that I find really grabbing and appealing while remaining extreme and rather inaccessible. This being the first album of theirs I've been able to cover, hopefully a few people might find this worth while.
Starting things off, one has to address how The Amenta have managed to stay relevant (at least in my eyes) in a world where extremity is pushed in every which direction. Groove turns into djent, death metal must be faster and even more brutal, black metal turns to noise and raw/no production to make it more grim than even most 90s bands, and that's just a few mentions. The Amenta take those three aspects, groove, death metal, and black metal and fuse them with the always present industrial edge they've had since the beginning and make it even more chaotic sounding than ever. In my mind, if Fear Factory is the mainstream face of industrial metal, with soaring choruses and punchy and clean production and The Berzerker is the underground asshole (and by no means do I mean that in a bad way) of the genre with a much more chaotic and grindcore sound, than The Amenta is the middle ground between them sonically. They retain the aggression and harshness of the latter band while retaining the songwriting of the former. Which is perhaps the reason why I think I've stayed with the band since first hearing their debut album, Occasus, something like six or so years ago.
In my opinion, the band's songwriting has reached a new high with the addition of Cain Cressall on vocals. I find that his vocals fit the band's sound much more than their previous vocalists did. When he growls and screams, it feels like it's coming straight from the pit of his stomach and it feels like he is literally foaming at the mouth with rage or anger or whatever. It might just be the production, but his vocals just pop in a way that very few do. It's very hard, nowadays, to make a screamed or growled vocal style sound passionate, most just do it because it fits the genre they're performing while some do it just to fit into being a part of a scene (deathcore/metalcore/djent/etc.) but Cressall sounds like he is literally putting his entire being into his performance, and it really pays off.
Musically, the band have always been intense but on this album, they're really pulling out all the stops. They've always been aggressive, there's no doubt that they can pull that stuff off with ease at this point, but there are some more spacious and open sections in a song like Obliterate's Prayer where it sounds like they're trying to push their sound into a slightly more atmospheric realm. It also sounds as though Cressall is using some "cleaner" vocals, and while I don't think the band going into a style like Fear Factory would be the best move, the sound they appear to be going for on here makes me think that them attempting a more atmospheric, perhaps doomy, song with clean vocals is something they could do well. The middle of the album also shows a bit more of a DSO kind of vibe by channeling some more of those dissonant guitar riffs (of which I am so fond of). Granted these songs, Sewer and The Argument definitely channel just as much death metal as the more chaotic black metal of DSO, but it's just awesome to hear the two put together in such a way that it makes you feel the anger and emotion coming from the performers.
While it certainly isn't the sort of style that will be for everyone, I've always enjoyed the outright brutality that these guys deliver on their albums. If you want to hear an industrial band that really knows how to pull that style off while retaining the extremity of the more underground metal genres, I don't see how you can ignore this band. It's an album I'm always excited to turn on and hopefully you'll dig it just as much as me!
Score: 9
Highlights: Ego Ergo Sum, Obliterate's Prayer, Sewer
Posted by maskofgojira at 9:14 AM