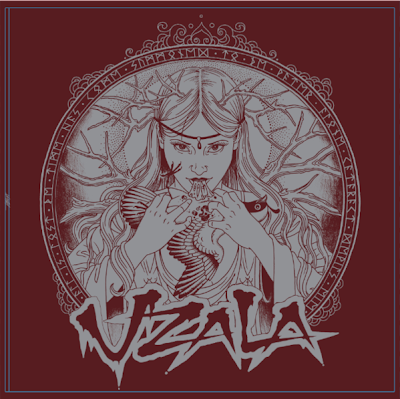 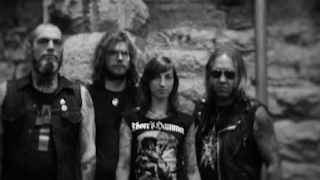 I know I've said in the past that I am not a big fan of female singing in metal, not anything wrong with it, I've just grown immensely annoyed with what I've heard. I was very hesitant to review this album because I knew that there were going to be female vocals on it, what tipped me over the edge was kind of just deciding to take a chance on it and hope for the best. It's not about having low expectations, but a very worrisome idea of what the music will sound like.
What first hit me when I put this record on for the first time was the production and atmosphere. Unlike a lot of doom metal record which tend to go for a very big and huge sound, both in terms of the atmosphere and production, this album was instead very foggy sounding, like the whole thing was covered in a sort of smoke. It really isn't the sort of record that tries to be huge and overwhelm you with how crushing the riffs are and how pull you down into a dark place in yourself, it's more of a traditional sound that is more akin to that of early doom bands like Black Sabbath or The Obsessed whilst channeling more of a blues element that isn't found in a lot of, let's say, modern doom groups. I guess to address the whole female vocal thing, I doubt I will ever say that I could listen to a female fronted band, that I haven't heard yet, and not be at least a little nervous due to past experience, blame it on the power and symphonic metal genres, I can say with certainty that the vocals on here were in no way bad. Darcy Nutt's singing is quite different, but good, in a way that I think if you stripped away everything but her vocals, it could almost be choral like, as opposed to Chad Remains, whose gruff screams add a more visceral tension to the record. Not to go too far off base, but I would take this record, and band over the more hyped Dark Castle, who seemed a more than a little lost on their latest release. Vocally and sonically, I do think Uzala is a better band.
Songs on here tend to run the gambit from more of the traditional blues influenced metal, The Reaping, to I guess is more of the commonplace now where it's more about groove and atmosphere, Ice Castle, not to say the two don't overlap on occasion. It's hard deny that there's a very strong retro hard rock and psyche rock influence on the band, in addition to the whole doom and sludge genres, where riffs do have, more or less, a tendency to kind of break away from being straightforward. I won't lie to you though and say that the album isn't without faults, I do think that some of these songs do go on for too long and can begin to drag, for me it was the likes of Cataract, which is only on the cassette version of the album by the way, and Plague. I also found that the highs of the record were really high, but when the record hit a bit of bump a little more than half-way through the album, it never really got back up to the same level as before.
Though I was hesitant at first of the record, I think it turned out to be solid piece of work. All in all, I did enjoy it, and I didn't find it to at all be a bad album, just a bit overlong in my opinion. Doom fans should definitely still check this out because it is the type of record that could appeal to fans of slow music.
Overall Score: 8
Highlights: Ice Castle, Wardrums, Death Masque
Posted by maskofgojira at 1:53 PM