The United Sons of Toil - When The Revolution Comes, Everything Will Be Beautiful (2011) 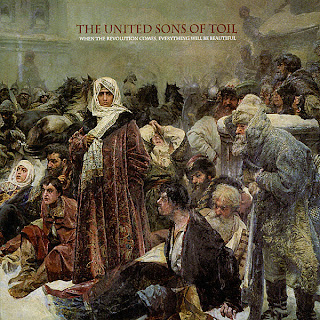 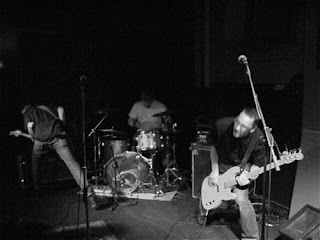 I said a couple of weeks ago that I am not a huge noise rock fan, or post-hardcore, but somehow I've gotten quite a few records recently, either through friends or people telling me I should check them out, that have been pretty good. I remember seeing this album, the cover of it, last year, thinking it looked pretty good, and didn't really think any more of it. It wasn't until I was told about the album, by a friend and the band, a couple of weeks ago that I finally got around to listening to it.
I have to be rather frank with something about my own personal taste in music here and say that I'm all for melody and harmony and big, soaring choruses, but I find that when a band can make use of dissonance in an interesting way, I can find it even more impactful on me. There's also something that can be said that, in my mind, a lot of harmony in music make me think as if it's been planned and rehearsed while dissonance to me has a more vibrant and youthful sense of exuberance to it that just makes me think that the music could just fly off the reins at any moment and isn't so tightly constrained. I don't want to say that this album isn't melodic, because the songs are structured in rather simplistic ways, but their performance in many of the songs gives them a more loose and live sort of feeling. The riffs, as I expect they should be within post-hardcore and to an extent noise rock, are weird and abstract while occasionally treading into more melodic chord progressions. One could say there's a hint of jazz-inspired dissonance within these songs as well, and that if you stripped away the almost punk approach at which most of these songs are performed, you'd get jazz songs. But it's that raw and punk kind of aesthetic that I like about this record, the bursts of feedback in The Shining Path or the near post-rock bridge in Sword of Damocles just keep the record moving and feeling like the band is playing in front of you.
Now, to just get it out of the way, I've said before that I'm not much of a lyrical guy, as long as I don't find myself offended in any way by the lyrics, chances are I will give a band a chance. Whatever message these guys want to spread is fine by me because I do believe that the music is strong enough to kind of stand on its own. That's where, ultimately, this band does succeed in my mind and where others have failed me, the songwriting is good. The songs on here stick with you after the album is finished. The opening and closing tracks, Alcoholism In The Former Soviet Republics and State-Sponsored Terrorism respectively, stuck with me, perhaps the most of all the songs on here, with their odd sense of vocal harmony and great dissonant riffing. I should speak briefly on the vocals though because there is a lot of diversity among these tracks within them, from throat shredding yells to guttural growls, tough-guy snarls and straight-forward melodic singing, and it's probably the most inconsistent thing on the record in my opinion if only because more often than anything else on here, the vocals can miss the mark.
It's the type of album that manages to stick with you in a way that many other albums I've heard have not done from other groups in similar genres. I didn't originally expect it to be as good as it is, but I'm certainly not going to complain. I'd say take a chance, no matter you political standing, and listen to this because it is good.
Overall Score: 8
Highlights: Alcoholism In The Former Soviet Republics, The Concept of The Urban Guerrilla, The Contrition of The Addict
Posted by maskofgojira at 2:56 AM