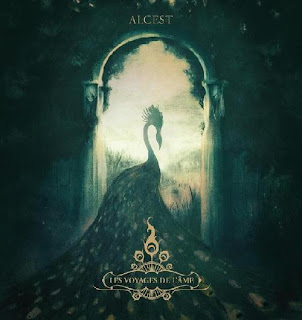 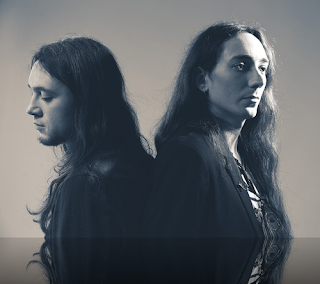 If there's been an album this year, or at least for January, that's been hyped to death, it's probably been this one. Even more so than the 2009's Écailles de Lune, the hype behind this album seems to just make people crazy before they really even dive into it, I believe anyway. It might have been all the good reviews towards the album that kind of made me feel like it was bound to let me down but to say I was crazy about this album coming into it would be a total lie. My overall interest to the work of Alcest has dwindled, though I am still a fan, as others have apparently latched on it.
The influence of Alcest has obviously been felt throughout the entire black metal scene within the last couple of years, with numerous younger bands and projects popping up and attempting to fuse post-rock and shoegaze with black metal. There are obviously those who are ripping his "style" off better than others and there are groups out there doing something a little different with the whole blackgaze kind of sound but Alcest is definitely the most renowned group to emerge from that young scene. When Autre Temps was first released as a single last around a month ago I don't think it would be wrong to say that I was struck more by the visuals accompanying the song in the video than the song itself. It wasn't until a couple revisitations of the video that I kind of got a handle for the song itself. In comparison with the material that was present on earlier albums, I was a bit disappointed by the song because it didn't really spark anything in me like other releases had, it just left me a bit empty inside.
So, saving my judgment for the album, I waited until I could hear the whole thing to kind of see if it would be the entire album that would bring some sort of reaction to me. When I listen to all three albums, full-lengths I mean, I do believe this to be the weakest of them because I don't feel any darkness in these songs, and that may very well be the point of it because Neige has said this will be the last time he wants to use screaming vocals in Alcest. Though a good portion of this album is electric, the sound of the guitars, the melodies they're playing, and the overall atmosphere feels too bright and there's no contrast in it. Even when there's a section that's performed like black metal, the sound is too bright to really make me feel like it's a "real" black metal part and comes out sounding more like post-rock with blast-beats and double-bass, which, once again, may have been intentional. In terms of consistency in the sound of the album, this is the best because the entire album flows together and feels like an album, where as the last one was more or less made up of various pieces that were new songs, at that time, and older material.
Don't get me wrong though, just because I'm not as partial to this album as the others doesn't mean I think it's a bad album, far from it. I do believe that this album has some of the best material Neige has ever written on it. Là Où Naissent Les Couleurs Nouvelles is the clear highlight of the entire album in my opinion due to its flowing melodies and fantastic ending. It's also not entirely a bad thing when I say that the atmosphere is too bright, for myself, I would have preferred that there be a little more darkness on here, but I do believe Neige to be extremely skilled when it comes to crafting a sound like this. I think that his melodies are nice and while not as frequently as on previous albums, they do evoke a sense of calm within me. It's unfortunate that Havens was actually an interlude because I rather liked that melody to be perfectly honest and I would have liked to have seen it progress into something more.
I don't know if I'd call this a letdown because I didn't really have expectations that were all that high to begin with coming into it, but it isn't the best I've heard from Neige. Like I said above though, people have already thrown their support of this album out there with tons and tons of high scores littering the net and magazines already. Not that this review will ultimately change your opinion on the album if you've already listened to it but I think it would be best to approach it with an open mind and not setting your expectations too high for it. Not a bad album, but not great either.
Overall Score: 7.5
Highlights: Là Où Naissent Les Couleurs Nouvelles, Nous Sommes L'Emeraude, Summer's Glory
Posted by maskofgojira at 11:24 AM