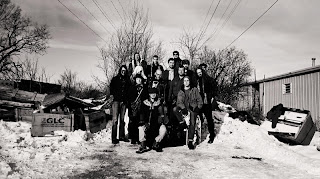 I'm a fan of folk and psychedelic music, the former has probably been more present than the ladder, nevertheless, I was very interested in this album once I first found out, stylistically, what kind of record it was. Upon looking up the band I only realized that they had released about a dozen-plus releases throughout their existence, so this is my introduction to the band. This is another review that's been quite a while coming, as this has been a difficult one to really digest.
Ok, admittedly, despite my love of 60s and 70s psychedelic and progressive music, folk rock, jazz-fusion, and whatever else was more likely to be used as an accompaniment to a psychedelic drug back then, freak folk is a sub-genre that I have yet to explore deeply. Though I am certainly no stranger to improvisational music, I can't say that I've been the biggest fan of everything that I've come across (though when a lot of it has come from the avant-garde work of John Zorn, that probably isn't saying a whole lot). As far as how I feel towards this album though, as I have probably listened to this one at least twice as much, on and off of course, I'm still quite mixed towards it. Since I don't always have the time to sit down and listen to an hour-plus long album, I end up listening to sections and/or songs from it either when I have the time or in the car, which, incidentally, is not the best place to listen to this album by the way, so I've had various experiences from thinking it was simply amazing and trippy to finding it absolutely boring and very tiring. I can't deny that because most of these songs end up topping ten minutes, and since there is relatively little structure in them (to my ear), it can become tiring at times.
Now, what I've come to understand as freak folk, avant-folk, and similar genres of more-or-less free-form folk music is that it's performance varies from band to band. On this release the band bring a variety of ideas, as well as instruments, to the table and use them to varying degrees of success. Personally, I found the more psychedelic Feast of St. Nicholas I & VI to kind of be a standout in terms of how the band utilized their instruments because it was a very fluid track that was well paced from beginning to end and was very easy to get lost in. I also feel that it's probably the best embodiment of the sound of this entire release in that there are moments that are more in the vein of folk and country music but it also trails off into more trippy drones and ambient passages closer to its conclusion. In my opinion, the other four tracks on here may exhibit similar themes, but never really end up as well rounded as that one track does.
With over half a dozen listens right now I can still find it hard to try and get through this record at certain times, it's very mood oriented listen for me. I can't listen to it if I'm feeling too happy or sad or angry but very neutral. It's not an easy record to get into and trying to get into it can, at times, feel like you're just beating your head against a wall, but if you have an interest in this sort of music, you will be rewarded. No one said avant-garde music was meant to be easy, and this album is proof of that, at least to me anyway.
Overall Score: 7.5
Highlights: Feast of St. Nicholas I & VI, Twelfth Night Reunion
Posted by maskofgojira at 11:23 PM