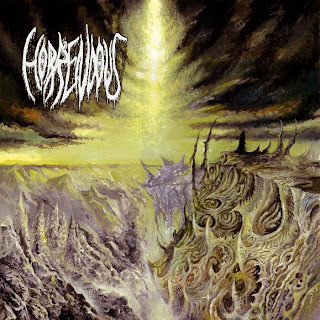 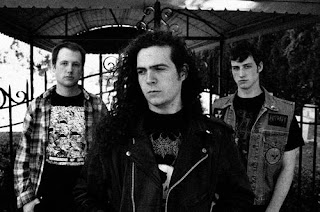 It's no secret that I love death metal that sounds old, like early-90s kind of old, so anything with that sort of sound is likely to appeal to me in some way. There just something more appealing to me about a band that sounds rawer and more gritty when they're doing death metal and it's a sound I constantly like tend to favor over more polished sound records. The first time I saw the cover for Horrendous' debut full-length I just knew it'd be something good.
Listening to a record like this is a rather enthralling experience. There's a lot of energy and life in these songs, even when the band enter into a more doomy passage, it's always got that little extra punch to it that just makes it pop out at you. These guys definitely have that sound that I crave from my death metal, it smacks you with that early sound that still owes a lot to thrash and punk, but is recent enough to embrace slower and more melodic breaks. I was quite surprised by the more "progressive" flair that was demonstrated on the album closer The Eye of Madness, that seemed like it went off into some territory that you might know from early Cynic and Atheist records. There's also an influence of black metal coming through as well, though to a lesser extent than the other styles, it did bring a nice flair to some of the riffing, hear opener The Womb. In my mind, it's one of those things that could have only happened today, where a band manages to combine various styles, even if they are all a part of a greater single genre (being death metal in this case), and pull it off with applaud. Each song on here has its own sort of flavor, but each has bite and spunk as well as variety, things that are sorely lacking in death metal that is polished, to be honest, even older bands don't really have those anymore either, but it's in here for sure. There's a noticeable difference in every song on here, whether it's a more straightforward death-thrash kick in the face or a more winding piece of melodic death metal with epic sounding melodies, and it's something that really cannot be overlooked when talking about this album.
There really isn't a whole lot to complain about with this record to be honest. Since my first listen, it's just been one of those albums that I can listen to over and over, and I haven't gotten bored with it yet after nearly half a dozen listens. Personally, one of my only gripes about this album has to do with the fact that I think the kick-drum is a little too loud in the mix and can be a bit overpowering at times. While it wasn't a problem for me, it struck me that some of the melodies on here feature a bigger amount of reverb on them to kind of make them stick out could potentially strike someone as out of place or just a bad decision. So far, I don't think it's been received as such, which is good, but I wouldn't be surprised if someone saw that as a flaw. Like I said though, beyond that there really isn't a whole lot to hate on this about.
With this being one of the first 2012 albums I've heard, I can safely say that it looks like death metal is gonna have an even better year than 2011. It's probably gonna sound weird saying this, but I do believe it'll be hard to find another death metal band that's gonna be able to top this album (and it's still in January!), that's how good I find this. I seriously hope you check this record out if you are in any way a fan of death metal, this is top tier stuff.
Overall Score: 9
Highlights: The Somber (Desolate Winds), Fatal Dreams, The Eye of Madness
Posted by maskofgojira at 10:49 AM