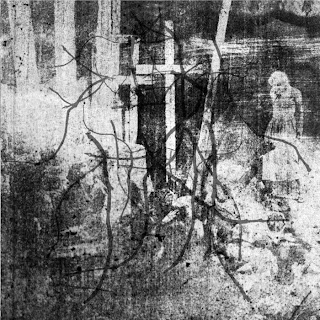 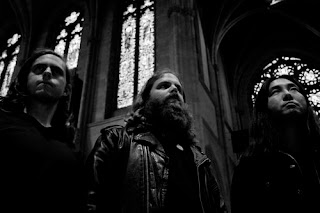 Last year Sutekh Hexen really made an impression on me after hearing their Luciform album, turning me into a full-blown fan after being quite lukewarm towards them in the past. Being quite prolific, last year alone the duo released three 7' EPs (one might be a single depending on how you view it) and various reissues of them and their demos from 2010. This is their first release this year (I'm already aware of two other releases that are planned for this year alone) and the first with new member Lee Camfield behind the electronics. Being released on Handmade Birds, expectations are high as always.
Let's discuss something a little out of the ordinary to start this off, neo-folk music. Now, I said a couple of months ago, I think, that I was fairly new to the sub-genre of neo-folk music and I have since expanded my catalog of groups within that sub-genre, but I wouldn't say I'm nearly as big an enthusiast of it as I would like to be one day. When one usually thinks of neo-folk music, or at least in my experience with it, it's more common to think of the sound pioneered by groups like Sol Invictus, Death In June, Current 93, or Darkwood (to name a couple), it's more or less a somber and rather melancholic listen rather than some of the more upbeat nature of what's come from a lot of indie folk style, and then you have the lo-fi singer-songwriter stuff tends to keep a more balanced atmospherically in comparison. I'm sure at this point you're probably wondering what any of this has to do with Sutekh Hexen, a black metal band; and when it comes to this release, it has everything to do with it.
Unlike the duo's (now trio) previous releases, this release takes a very harsh left turn from everything else they've done so far. While there are still layers of distortion and noise, harsh screams, and guitars that blur the line between actually being a guitar and just noise, but those elements have been reduced in favor of a far more brooding and melancholic sound. Instead of an outright assault for ten to thirty minutes, of five minute tracks, what you have here are three extended tracks that not only reintroduce those former elements of the band but bring a new light to them as well. I can only speak for myself but this wound up being, by far, the band's most atmospheric album. Behind all harsh noise and distortion was this dark tension that was just lurking in the background. Listening back, one could say that ideas that were present within the Shadow single are on here, but are fully rounded and more complete sounding. Aside from that, and to return to the neo-folk idea for a moment, you actually get a acoustic guitars that somehow blend their brutal aesthetic with more subdued and somber instrumentation. Even at its most intense, the shortest and closest comparison to their older work, Lead Us In Warfare, actually winds up sounding more like a doom metal song, even if they're playing fast. As a whole listening experience, this is the band's most sonically "complete" album yet, with the entire album having its ups and downs rather than mainly smacking you around for thirty or so minutes.
I'm sure that there'll be more than a couple of people who'll be lost after listening to this, or reading this, and might take against the band doing it, but it's going to more than likely further the band in creating a far more unique sound. If you can take a shift like this one from your favorite raw black metal band, you will learn to love it as I did. I will admit that it took me a couple of listens to kind of wrap my head around the record and the ideas present on it, but I am glad that it is different from their other works and manages to stand as an individual in their material thus far.
Overall Score: 9.5
Highlights: Every Track Is A Highlight
Posted by maskofgojira at 9:43 PM