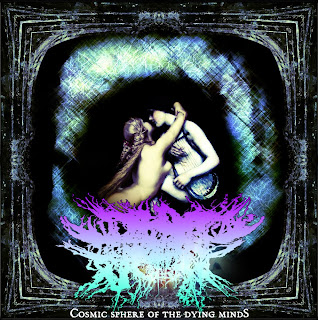 I guess I should preface anything I say in this review by saying that I am not a fan of a good percentage of electronic music out there, not that I'm against any of it, but I find very few artists that intrigue me. I am also not a huge fan of the brutal side of death metal, slam death, porno-grind, goregrind, all that sort of stuff for various reasons that I would go into here. One would imagine that the fusion of any of these ideas I would instantly find detestable, but yes, I did give this a chance. I'm still open to being wowed by a band even if it's in a style I don't usually like.
The ideas present on here range somewhere between being original and unique, and then being just plain weird and uninteresting. Coming from someone who doesn't find programmed drums playing blast beats at 360 beats per minute or extended use of incomprehensible toilet bowl vocals, which to be honest, I have a hard time telling if they're even in a song sometimes because of how processed they wind up sounding, to be all that interesting, the ideas present on this album aren't terrible. Now, they're by no means amazing or anything like that, but like I said, I'm not a fan of this sort of stuff, so this is passable and I didn't find myself annoyed by it while it was on. But what of the electronic ideas present on here; I said I wasn't a fan of a lot of electronic music, in which I may be exaggerating a bit, but the infusion of the more brutal styles listed above with elements that, as far as I can tell, come from everything ranging from chiptunes to dubstep to trance. On paper, it probably sounds a lot worse than it actually is. Now, even when those ideas are more dominant in a given song, Skullfucking A Fetus for example, they're not as headache-inducing as I've experienced in the past.
Now, I have to be honest and say that there are moments on here where things get out of control, for better or worse is subjective, but for me it did have a tendency to lean more on the latter. With so much sound coming at you at once, in some songs, there can be times where things just sort of become this wall where nothing really stands out. Personally, I was a bigger fan of the more melodic side of things on here, with a song like Necrophilic Mutilation of Angels actually repeating a melody throughout the course of its eight minutes and actually making the track that much more memorable in the process. It's unfortunate that most other songs don't reach that same level of melodicism and instead tend to focus more or less on the brutal aspect of the music, not to say that that portion of the project's sound doesn't have its benefits. There are moments on here, mainly the shorter tracks, where being brutal and somewhat straightforward does work and is well utilized.
I make no claims that this has turned me into a fan of any of the genres I said I didn't care for above, but it's interesting and that's why I chose to write about it. It's not so much the type of album that's I'd listen to every once in a while just to remind myself that it does exist and that it is an interesting fusion of styles. Even if you're tastes are close to mine and you don't usually care for these styles, I'd recommend at least checking out a track or two at least to just kind of say you heard what it had to offer.
Overall Score: 7
Highlights: Decapitated With A Rubber Duck, Necrophilic Mutilation of Angels, Fuck Their Brains Out
Posted by maskofgojira at 8:57 AM