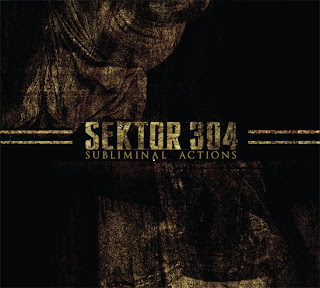 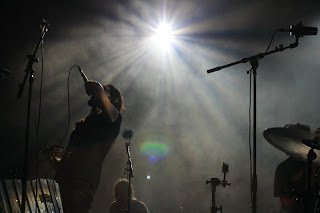 Until last year I was very unaware of the underground industrial-noise scene. I can admit that finding groups/projects that I personally find interesting and exciting has been a bit of a struggle, if only because it is different from my comfort zone, musically. Maybe it was because it wasn't metal enough or that I just couldn't wrap my head around it at the time, but a lot of the stuff I looked up I found pretty annoying and hard to kind of listen to. A lot of it just turns extremely repetitive and ideas are repeated until they're no longer exciting or in any way worth while and any sense of being engaging. But just because that's what a lot of the groups I looked up did to me, doesn't mean they're all bad. Sektor 304 may have been one of those groups that did something worth while.
But onto the album itself, what is there to say about this group that you won't find from other bands doing this sort of style. All I can tell you is that this is an improvement from their debut, 2009's Soul Cleansing, which I liked by the way. I'll admit that compared to some of the other groups I've heard doing this sort of style, this isn't the most abstract, quite a few of the beats these guys are using are quite easy to latch onto and remember right away. It's the type of album that is surprisingly catchy and memorable despite the use of rather odd instruments (which I guess could be deemed common for this style) like power tools, scrap metal, and what has been labeled as junk by the band. I have to admit that coming into the album I was a bit nervous because the band had apparently expanded to a four-piece and I was unsure how those extra two members would impact the sound. Luckily, it all worked out for the best, this album even topping their last one. There are moments which, and like I said I'm no expert on this genre, recall almost powerviolence-esque types of grooves, in addition to most of the guitar work being done on a bass. I also have to say that when this thing does go for a more dark ambient and drone type of sound, they do pull it off quite well, as the longer tracks on here clearly showcase a well developed mood and atmosphere that doesn't feel like it was simply thrown together to just make a long droning piece.
Now, I don't want to give anyone the wrong impression of this album just because I said that it's quite memorable in spots, it's still a very dark album. I actually should say that the album starts dark, by the end of the album you're pretty much in the sewers. I imagine this album, and I have no idea if this is a concept album or not though I doubt it, as being a sort of story where you start off above ground in a sort of apocalyptic world and with each track you and the world move further and further into disarray and chaos. By the end of The Prismatic Sun you're totally surrounded by utter filth and the world is in a state of disrepair. There are moments that give off a sense of paranoia and are genuinely unsettling, Terminal Stage for instance, while other moments are more direct and abrasive, Full Circle. They both work hand in hand with each other even though the album gradually looses it's intensity as it goes on. Despite the fact that I would have liked to have heard some more aggressive material near the end of the record, I can certainly appreciate the progression from being intense in a "metal" or "industrial" sense and being intense in a more drone oriented one. I can also respect that this is an album listen, it flows from one idea to the next, though the inclusion of a near grindcore-like section near the end of A.A.D.S. is a bit questionable, and I think it's a good step forward for the group.
I'm clearly no expert on this sort of stuff, but I know what I like, and from browsing around and exploring, I can tell you that I do like this. I think it's a record that most likely will lose some people but is interesting and well-rounded enough to definitely turn me into a fan of the band and respect what they're doing. I'd definitely recommend this to you if you're a fan of industrial, noise, drone, or powerviolence; I think you'd find something in here to really latch onto.
Overall Score: 8
Highlights: By The Throat, Friction, The Prismatic Sun
Posted by maskofgojira at 9:04 AM