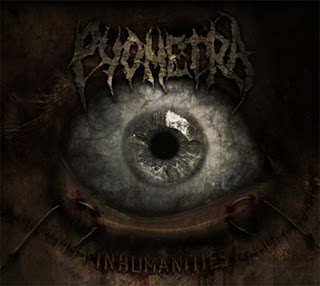 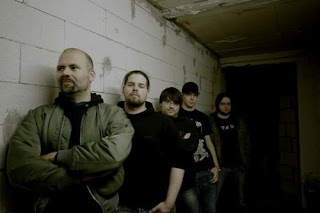 I'm pretty sure I've said in the past that I'm not a huge fan of the whole "brutal" side of death metal. A lot of the bands that are lumped into that sub-genre tend to focus more on low-end brutality and near-incomprehensible vocals that I just can't get into it, not to say there aren't bands I do enjoy in it though. When I was first contacted by this band and I saw they were placed under that sub-genre, I was a bit hesitant to give it a chance. But genre tags mean next to nothing when you find something good.
This seven song EP just hit the right balance between being brutal but also accessible. Now don't get upset so suddenly, chances are what you think accessible in this case means is probably nowhere near what this actually sounds like. Accessible in this case does not include the use of clean vocals, big sweeping melodies, or quieter interludes, this record is brutal, chunky, and a kick to the nuts of whoever is listening. It's the type of release where despite being labeled as "brutal" there more inclusion of melody and groove as opposed to slams and repetitive grinding. I'd also say that the sound of the entire thing isn't overly polished on compressed, there's still plenty of authenticity in the sound of the band here. The drum sound in particular I enjoyed because it isn't too clicky or tinny sounding, as can be the case in a lot of other bands going for this sort of sound. The vocals are also a lot clearer and more understandable, from my end I consider that to be a plus, but are still quite low and guttural, occasionally going into more of that weird sort of guttural moan that the I've heard from other groups, hear Leech. I think there's a nice blend between the rather typical riffing that comes from the "brutal" side of the genre and more traditional kinds of ideas that make the songs a lot more memorable, to me at the very least, and more interesting.
This is the sort of death metal I like to hear, it's not just one thing, there are clear indications towards being more interesting instead of being just another brutal slam band. I think the songwriting talents that are demonstrated on here are strong enough to win over more than a few new fans and hopefully these guys can keep writing good songs like these for future releases. I think it's a solid slab of death metal that I could see plenty of people liking, no matter your preference on the sub-genres of death metal.
Overall Score: 7.5
Highlights: Drowned and Devoured, Hammer Redeemer
Posted by maskofgojira at 12:50 PM