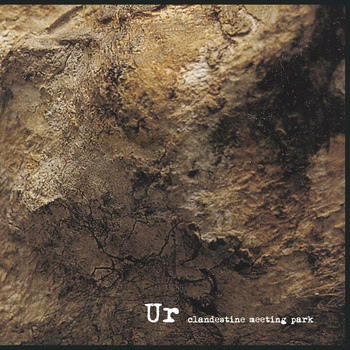 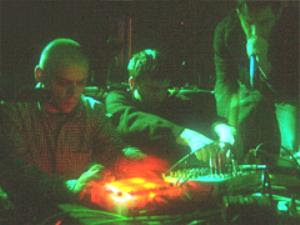 As someone who has a fondness for atmosphere in music, whether it be natural or man-made/manufactured, I do think that it's a trait that does help make music more engaging. A genre that appears to lack that trait, it a lot of what I've heard, is noise music, if only because it's so focused on intensity and blistering chaos that it removes everything else. From the brief descriptions I've read of this Italian trio, I'm hoping that this might be a change.
When you put this album on, it's a rather odd experience. At times it can feel like, at least for me, I woke up in some sort of industrial factory in the future. It's not a pleasant environment and it's rather dark outside. Visually, it's not all that enticing, but the music is surprisingly engaging. I found that despite the harsh manifestation of the sounds, there was an atmosphere, look above for what I had hoped for, that kept the soundscapes from feeling dull and repetitive. The ambiance in the background keeps things feeling dark and brooding despite the rather abrasive nature of the noise that takes up most of the foreground. What I rather like about these two songs is that despite how industrial and hellish both tracks sound, they never feel cold and isolated; instead they have a certain charm and warmth to them that I had not expect, especially since there is an atmosphere at work here.
I think it's quite a solid piece of work that does a good job at fusing intensity with brood atmospherics. I think it's quite good and well made noise that is certainly one of the better things I've heard come out of the whole industrial noise scene/genre/thing. It's a very niche sort of sound but if you enjoy this sort of stuff, I think you'll enjoy this quite a bit, like I did.
Overall Score: 8
Highlights: II 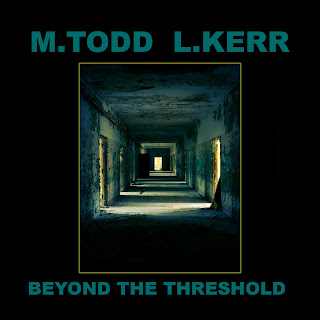 What can be said about a collaboration between two artists working within relatively abstract genres and deciding to make that collaboration abstract as well. The idea of two artists coming together from noise, from what I understand, genres and wanting to make something a bit less noisy, I can get that concept. I was a little worried about how this would end up sounding however because it does seem like this idea is one that I've been coming across quite a bit within the noise and dark ambient communities.
The eight tracks that make up this album are composed of exactly what I was talking about above, dark ambient soundscapes. In my head, I guess I kind of assumed that this would be based more or less in the industrial side of things but instead each of these tracks evokes a more shapeless atmosphere that morphs and moves around throughout its length. A lot of the sounds used throughout each track lends them to be more abstract and anthropomorphic than a lot of other dark ambient artists I've heard, at times recalling bits of what makes Lustmord a king of the genre. I don't want to give the idea that this is totally devoid of industrial elements though, because there are moments on here where a "harsher" and more "gritty" edge can certainly be heard from within the ambiance. But to be fair, the whole thing does have a sense of coldness that I wouldn't have expected from either side of the sonic spectrum from where this thing is coming from. It's that sort of isolated factor that does make this record stick out among other rather bland dark ambient records.
I think it's a decent record that would be a good addition to anyone in the market for some rather cold sounding ambient music. I do refrain you from listening to this record in the car or when you're in a more crowded environment as it can, and most likely will, fade into the background where you forget you even had it on. I'd say it's ambitious enough to be interesting but not as groundbreaking as I've heard it was, still worth checking out though.
Overall Score: 7.5
Highlights: 1, 5, 8

Posted by maskofgojira at 8:05 PM