Pyrrhon - An Excellent Servant But A Terrible Master (2011) 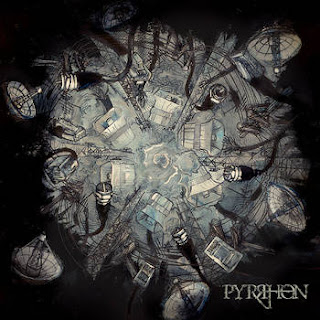 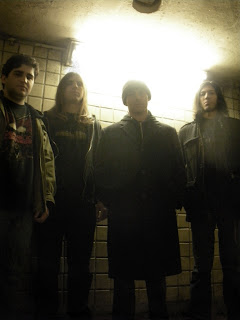 Whatever happened to the technical death metal subgenre? I'd like to know who said it was ok for every band to pretty much start sounding the same, I wanna know who to place the blame on. I don't mean to offend anyone here (cause there are quite a few bands that I like within that subgenre with several putting out albums later this year) but I don't think anyone can really say that ideas have not been rehashed over and over in the last decade, leaving a lot of the originality in the genre to fall away. Though I initially ignored this record from Pyrrhon, it's about time I cover it.
When I initially blew off this album it was because no matter what I had read about it, which incidentally was mostly good, I had it in my head that it would be "just another tech-death album" with nothing I hadn't heard before. After listening through it several times I can say that while my initial idea of the album may have been right to give me caution, it should not have made me stay away from this. To be quite frank, this is a tech-death album without question, and some of the ideas really aren't original, but in pretty much every other regard I was incorrect. Whilst moments of this do cross over into modern Necrophagist or Origin territory, the majority of this album stays in a much more dissonant and chaotic realm. There've been comparisons to the likes of Gorguts and Atheist, which I totally hear in here, but I'm more keen to listen to a group that sounds closer to those bands than the ones that basically shred for minutes at a time and call it a riff. The spastic tendencies that help to define this band's sound can often cause them to cross over into mathcore, which I'm more than happy to accept as a part of their sound as well.
I have to say something that might get some people's feathers ruffled here but I think it has to be said that in the mathcore genre, and I'd even say bands that were first starting to do the whole metalcore thing when it was first emerging did this to an extent as well, dissonance and frenetic tendencies were accentuated more within a band's sound. Melody is all well in good, but I think to call yourself a technical band, you should at least bring a little bit of that into your sound, or at least that's what I believe. So I give more credit to Pyrrhon because they make use of quite a bit of that in these songs, hear Idiot Circles for instance, and make it sound interesting and good. I await more bands that have the balls to go as far into the realm of chaos and disharmony as these guys have. Beyond that, there were a couple moments on here where things slowed down and even mellowed out, which appears to be an idea, again, a lot of band's within this subgenre don't appear to understand or be able to get their head around, because when this thing mellows out, it works for the song because there's a rising tension that allows the heavier sections that follow to be that much more powerful. Honestly, it's not that original or groundbreaking idea, but these guys know what they're doing and are obviously years ahead of what a lot of bands, especially newer bands for that matter, appear to be doing.
This is what I wish more bands would be willing to do with their sound if they want to call themselves original and not just another tech-death band. The willingness to just go each and every where they can really comes through in a positive way and gives this album extremely replay value. Gimme a band like this over another Necrophagist and Origin clone any day, these guys know how to make songs interesting and worth listening over and over. In the end, interesting and creative bands will always prevail over clones for me, thus, this band is a winner.
Overall Score: 8.5
Highlights: Idiot Circles, The Architect Confesses (Spittlestrand Hair), Flesh Isolation Chamber
Posted by maskofgojira at 1:02 PM